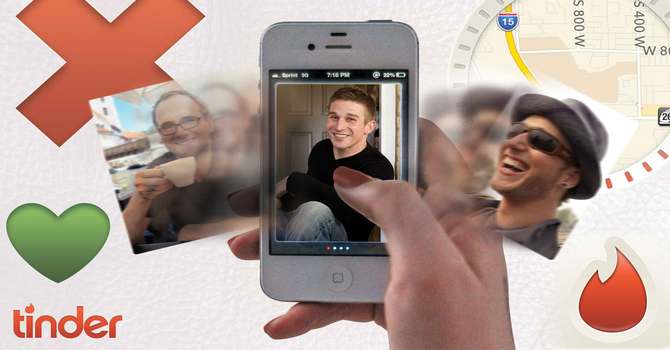 Tinder is a painfully addictive dating app that matches you with people in your area. Check out some of the weird and wonderful people on there and their feeble attempts to chat up and woo women.

A couple of weeks ago my best bud popped home from New York and asked us if we had heard of an app called Tinder that her and all her friends use, across the proverbial pond. She explained the concept and showed us how it works: you create a profile that takes information from your Facebook account but doesn’t post anything to it, you can put up a bunch of photos and a tag line and that’s it. You select your preference, men, women or both, and the app proceeds to show you photos one by one of people in your area-ish. You then swipe through them and can see if you share any mutual Facebook friends or interests and how many miles away they are from you. If you swipe left you are saying ‘no I hate your face, fvck off’ to their existence, but if you swipe right you have indicated you like the look of them. If they have also liked your picture whilst perusing the app, then you are a ‘match’ and can have a conversation with them. Suffice to say we all immediately downloaded it and have spread the gospel of Tinder among our collective of pals. It is painfully addictive and pleasurably pathetic. Considering the percentage of weirdos and perverts in the world, Tinder is relatively free of them and I am yet to encounter anyone who has asked me whether I would be interested in ramming a live ferret up their japs-eye, while they masturbate furiously over an episode of Round The Twist, imagining the joys of fulfilling their life-long dream of living in a lighthouse. Well not yet anyway. But there are a lot of laughable snaps on there, as well as people who just don’t have a clue and that’s what breeds the addiction I think. You can tell that men have chosen and decided on specific opening lines that they use on everyone, either lines that make them seem all casual and non-sexual-predatory such as ‘so how is this thing working out for you, found anyone fun to speak to yet?’ or really structured lines like ‘so what’s the worst chat up line someone has tried on you on here?’ That is the worst chat-up line you dickhead. But some people manage to get through the first stage ok, I personally like to test people’s ability to be funny and/or reply something witty to a weird comment I may naturally make.

However, no matter how many stupid or dull people you end up being matched with, you just want to swipe again and again and again to see who you’re going to be faced with next. Spotting people you know or haven’t seen for a long time on there makes for a briefly amusing moment, but then you remember they have also seen you on there and you retract your scorn towards them. The delightful thing though, is that is does not carry the shame of a dating website, I’m not sure why but I imagine it’s because people don’t really take it too seriously. It also doesn’t carry the taboo of a just-for-filthy-anonymous-sex-with-strangers kind of app where people meet up and bang the living shit out of each other and then never speak again. Some people on there genuinely seem keen to meet for drinks and dates and the suchlike, without the pre-conceived notion that you are doing it just to smush your genitals together. I don’t think that’s me being naive either, as I have male friends on it who are genuinely not just there to fvck but looking to meet a nice hot female, who they can take on a date.. and inevitably bang down the line. I actually had a pretty successful date with a nice chap who didn’t try and jump me, but did provide a hilarious evening and a few other people I know have had similar experiences. Although in saying that, of course there are people who do just use it to fvck and fumble but fair enough, if you find someone on there with the same mindset as you, then go for it, swap bodily fluids all you like.

â˜› Bet You’d Tinder With Her: 13 Reasons Why Mila Kunis Is Hotter Than Tulisa Slagface

The fact you can see if you have any mutual friends softens the fearful blow of meeting up with a complete stranger that you have effectively met through the internet. These are no longer the days of our youth when mothers warned about meeting strangers from chat-rooms and Habbo Hotel, the type of stranger who would have probably lured you into a darkened alley and sliced you up into a thousand tiny crouton sized pieces, before serving you up in a Waldorf salad for their paedophile ring. No, no these days due to the advancement of stalking enabled social media, one can add them on Facebook before a meet and suss out their whole life story and whether they are likely to rape and murder you, or if they have a bizarre interest in making paper mache moulds of roadkill, or whether they are in a 5ive tribute band, which is helpful.

Upon deciding I was going to write a little something about it, I asked people what their experiences were and it’s interesting to see the different approaches. Some people will just like every single picture to see how many people like them back, some use it as an outlet to be weird to people, others get matches but then don’t communicate with them, everyone uses it differently. Here are some examples of the truly hilarious aspect of it, which comes from some of the ridiculous, pathetic or downright laughable choices of pictures and the things they think are clever to say. Oh and also there are two recurring phenomenons on there, men with their tops off and men on boats.

Hey Joe, there’s something coming up behind you! 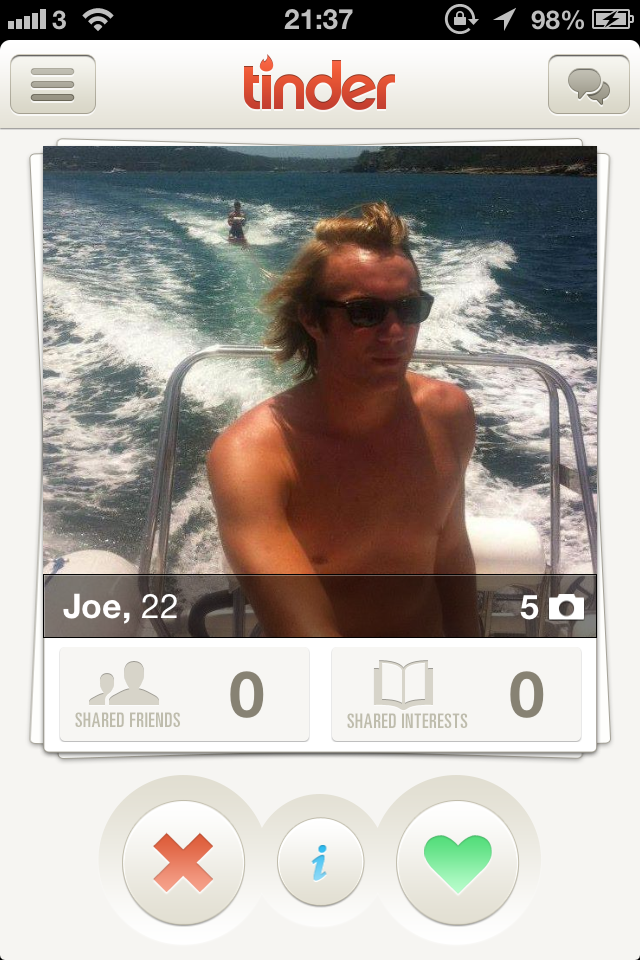 Got something stuck in your teeth Will? 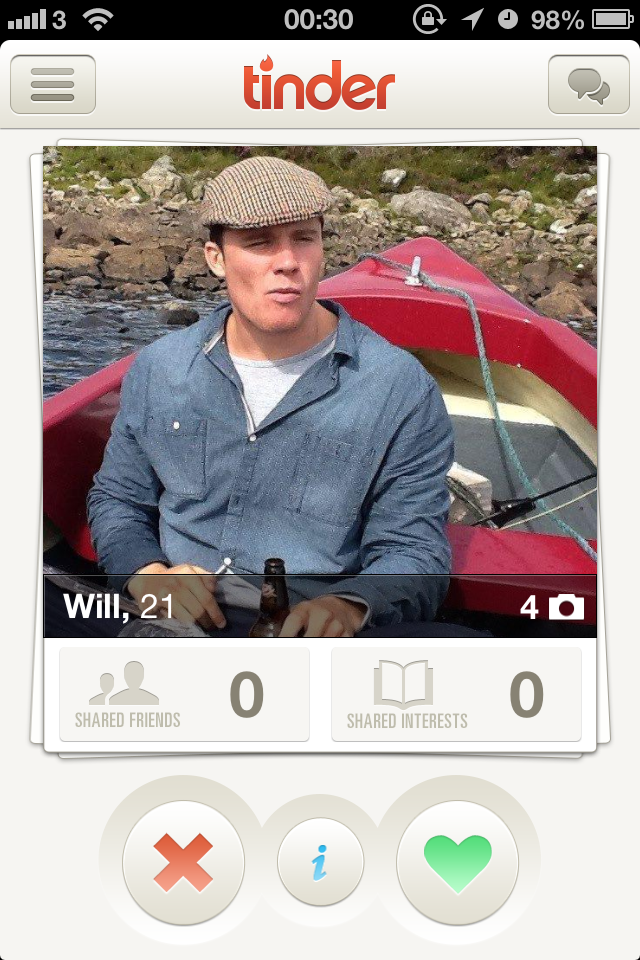 Arnie feeling the pressure of the big wheel. 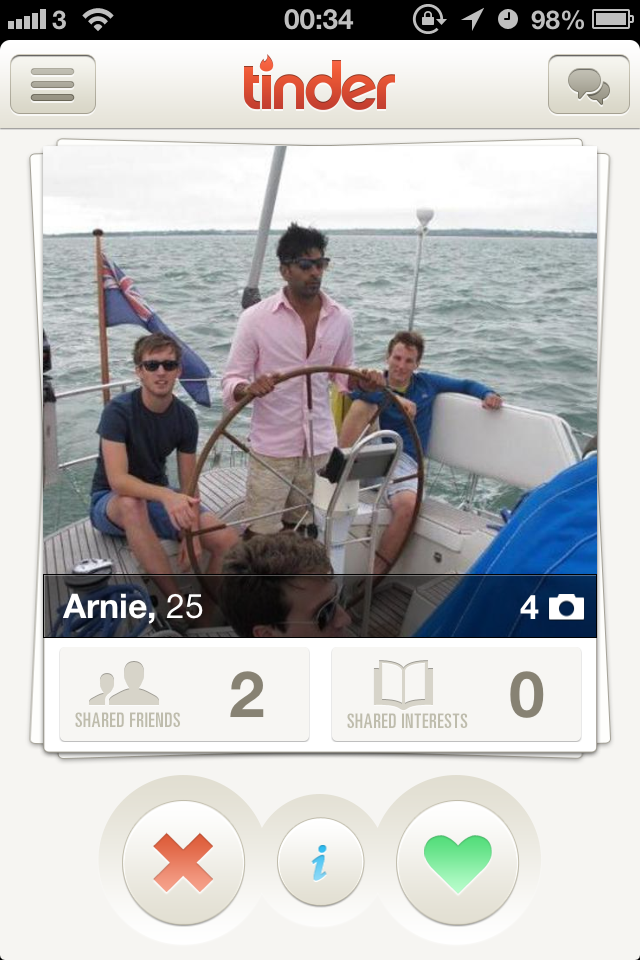