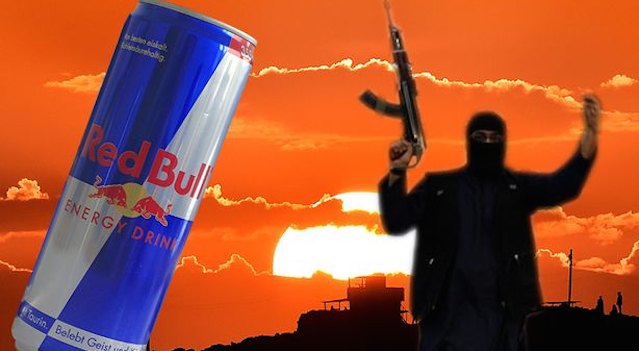 Those Muslim ideals and hatred towards Western corporations go out of the window when you need to stay awake.

You would think that all the aggressive training that those who join ISIS are put through upon their initiation was probably enough to keep them alert all day for fear of getting the absolute shit kicked out of them by their superiors, but it turns out it isn’t. Instead, they’re turning to Red Bull to help them stand guard and learn how to make bombs or whatever the hell else they are up to over in Syria.

How do we know this? A Turkish transporter named Mustafa Yamilaz told us, that’s how:

Every day we have four or five trucks carrying Red Bulls to Syria. The Syrian buyers don’t identify themselves to the transporters but the goods are transferred onto Syrian trucks at the Cilvegozu crossing and then taken to the jihadists.’

Ok, so that doesn’t sound that reliable but it does seem like Red Bull is going into Syria and unless they’re planning some dangerous stunt over there (entirely possible) it’s hard to think of just what else such vast quantities of the energy drink would be needed for over there. I suppose ideology goes out of the window when it comes to being able to actually stay up and pay attention so you can fulfil your ideology, right? Even if they’re selling the stuff to make a profit and not directly consuming it, it still reeks of bullshit in the face of their beliefs, even if they are using the idea that the end justifies the means.

Or perhaps they’re actually into Red Bull and when the pan Muslim caliphate is finally complete, it will only be McDonald’s and Coca Cola that are completely destroyed and Red Bull will sit by the throne of the master for help enabling its completion. Here’s hoping we never find out.