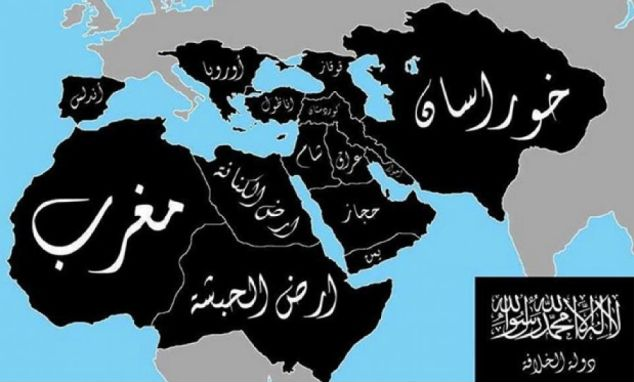 The Islamic State intends to rule over Spain, China and the Balkans – amongst other territories.

ISIS have been getting a lot of coverage on the blog recently due to their atrocities and downright evil take no prisoners nature, and it looks like their master plan has finally been uncovered with this map of what they call the ‘ten state solution’ – which they hope to have achieved in the next decade. As you can see from the above, it doesn’t look good for a lot of places.

A former Palestinian Liberation Organisation terrorist turned Islamic scholar (don’t ask) named Walid Shoebat has translated the map into English (which you can see below) and identified that the Balkans, Spain and Portugal and China all represent long term targets for the Islamic State. As has been discussed numerous times previously, the Islamic State shuns the idea of a traditional nation state and rejecting the notion of a government, instead preferring the system of a pan-Islamic caliphate.

Within the ten state solution, the primary fixture of the caliphate would be in Sham, which would include Iraq, Kurdistan, Syria and Lebanon. Other states that would be controlled by ISIS would be: Turkey (Anatolia); the CIS (seen as Gogaz on the map, and including Azerbaijan, Kazakhstan, Kyrgyzstan, Turkmenistan, Tajikistan and Uzbekistan); the Balkan States (Orobpa); Spain and Portugal (Andalus); Iran, Pakistan, India Afghanistan and potentially parts of China and Indonesia (Khorasan); The Gulf States (Hijaz); Yemen (which for some reason would stand on its own as Yaman); Egypt, Somalia, Libya and Sudan would be known as the Land Of Alkinana or simply Qinana whereas the African states underneath it would be called Habasha and those to the west of it would become Maghreb. 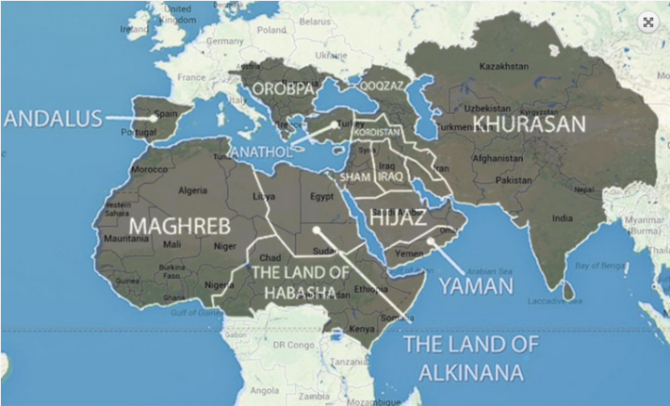 Clearly, the Islamic State has a lot of work to do if it once to achieve this in the next ten years. I’m sure I speak for all of us when I say that I hope it doesn’t achieve any of it. Terrifying.