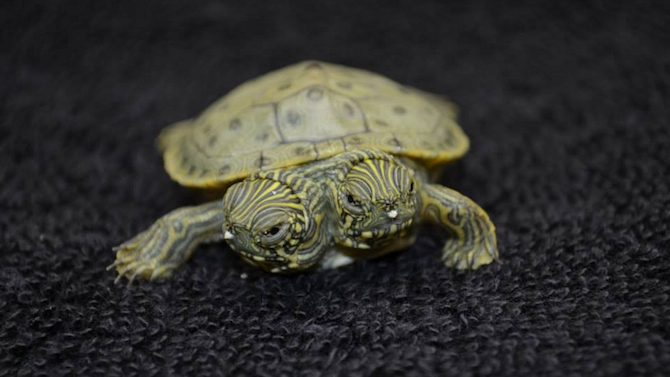 It was a normal week at the San Antonio Zoo as a bunch of baby turtles were born. Except that one of them had two heads.

The turtle was said to be perfectly healthy by zoo spokeswoman Debbie Rios-Vanskike and that it could swim, walk and hang out just as well as the three other turtles that were also born last week. She added that the zoo didn’t really expect it to face any complications in the future and that it should enjoy a long and healthy existence hanging out with all the rest of the turtles there in the Friedrich Aquarium.

The zookeepers at the zoo have decided to name the turtle (turtles?) Thelma & Louise which is pretty cute although there are probably some cooler double acts you could have named them after, like Bunk & McNulty or Walt & Jesse. Although I guess the fact that they’re called Thelma & Louise implies they’re female so maybe Thelma & Louise really is the best they can come up with? Romy & Michelle isn’t really the same is it?

You can check out the turtle (turtles? Still haven’t decided) in the video below. It’s kind of weird because it looks like a skull and crossbones has been painted on the bottom of its shell which I can’t really understand? There’s also a really cool bit where you hear an awestruck kid say something like ‘wow, that’s amazing’ and a really dumb interview with an American zookeeper. You gotta check it out.

The Best Animal GIFs To Watch When You’re High