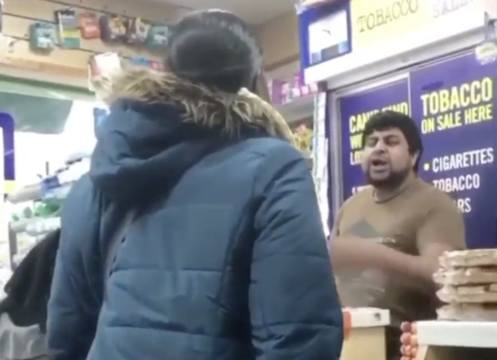 With many shop owners taking liberties and raising prices during the coronavirus pandemic, it’s hardly surprising that some customers will call them out on it.

This footage went up on Worldstar earlier without any other context so I have no idea where in the UK it was filmed, but it’s pretty funny nonetheless, especially the verbal exchange before it turns physical:

Lol – grandma was not playing around at all was she? Just a fearless warrior ready for a fight. Wonder if the shopkeeper made good on his promise to punch her in the face afterwards? Doubt it. If he did though she’d probably have her grandkids round in no time battering the dude and trashing the entire shop.

Also I’m aware that almost certainly isn’t a frozen pizza she threw at his head but I spent way too much time trying to figure out what it was and couldn’t come up with anything better. Solid aim from grandma regardless.

Speaking of which, get a load of this grandma who obliterated a skateboarder this week by launching a flower pot at his head from her balcony. Brutal stuff.