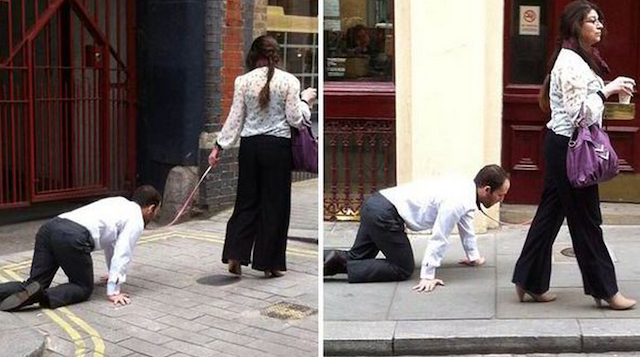 Some dude in a suit was being walked around the streets of Farringdon this morning on a dog lead – here are the pics and video.

Some guy in a suit was being walked around the streets of Farringdon this morning on a dog lead. No idea who he or his walker are.

Loads of people on Twitter seem to think he’s lost a bet but could he maybe be one of these weird business types who gets his sexual thrills from being treated like a slave? Wouldn’t be surprised if he’s paid out of his own pocket to be walked around on a lead by this woman, getting off on the humiliation. We’re not judging of course; do your thing little doggy boy. Woof! Woof!

Another picture of the man on the lead in London.. this is so weird (via @lilchrisxx) pic.twitter.com/SYfdYDEeIe

Spotted: A woman walking a man on a leash. #lostbet ? pic.twitter.com/CBWNBEqVs2