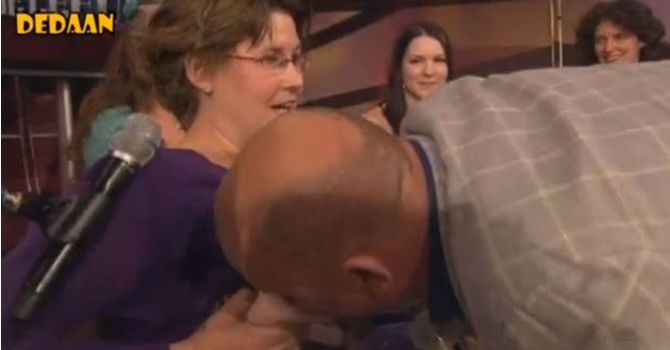 Those crazy dutch are at it again, this time a TV presenter gets breast fed live on a family show.

Paul de Leeuw, a Dutch “off the wall” type TV presenter/ comedian, has shocked the country (and now the world) with his antics on Saturday. He was interviewing some women, on a family show, who work for a charity that helps share breast milk about, or something like that. I wasn’t aware that such a thing went on, so thank you for raising awareness Mr de Leeuw. I’m not sure whether the section was too boring for him, or whether he was genuinely thirsty, but what followed was bizarre to say the very least. Paul asked one of the women ‘how does it taste, nice and sweet?’ she said he could try it as long as he didn’t bite, without hesitation he went straight in for a sample, right there and then. After coming up for air he promptly dove in to try the left teat for the sake of completion. He said he preferred the left teat and could tell she had eaten asparagus yesterday – Joker.

As you can imagine, people on social media sites went nutzoid about it. Everyone likes to make a fuss if they’re surprised by something, especially if it’s a bit odd. Personally, the only things that surprised me about it were that there were female bits and bobs on display on a television show in the daytime, and that neither the host nor the guest seemed the least bit phased. But that’s just because of cultural differences I guess. Maybe it’s not such a taboo over there? I don’t think it’s common though, we’d have covered it on Sick Chirpse yonks ago if that was happening on a regular basis.

The best comment, and I nod my hat to FB user Thom Tron for this, went as follows: “…not as weird as breeding millions of cows, impregnating them, killing the offspring, and drinking the milk ‘produced’ – heck, some people even let it ferment and go hard and grate it onto pasta dishes..” Touche. Point well made Thom.

Well, whatever you think, I’ll leave you with the video, I feel like a milkshake now……

Sucking Milk Straight From The Teet