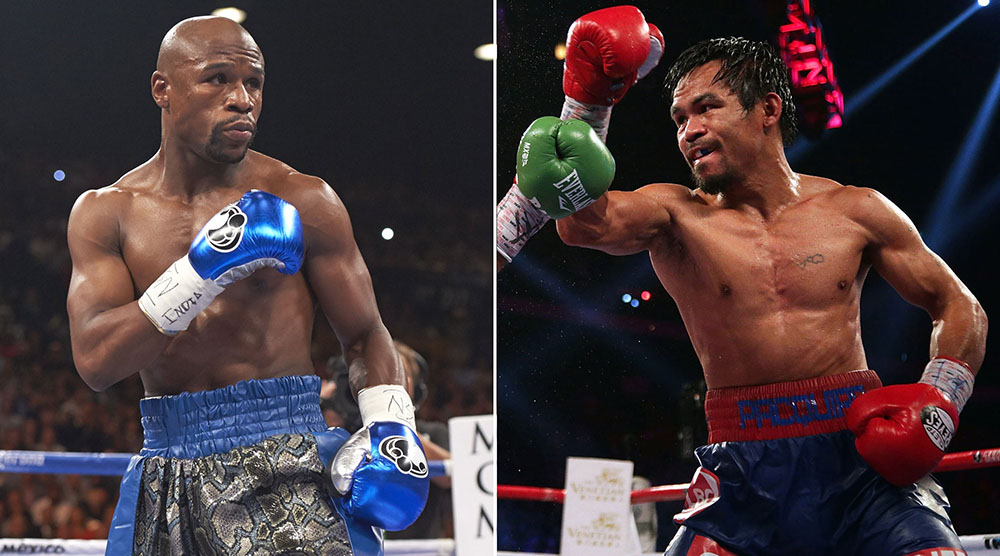 Finally, the fight we all wanted 5+ years ago is signed on both sides and ready to explode at the MGM Grand in Las Vegas on May 2nd 2015. No more fake news report, no more weird negotiations in the middle of the basketball court, no more goading each other on Twitter. Just Mayweather  (44-0-0-26 KOs) and Pacquiao (57-5-2-38 KOs) beating the shit out of each other in the middle of the ring. Still don’t really believe it’s happening? I get it — you’ve been lied to and burnt too many times before. But this time, it’s 100% FOR REAL.

Following Pacquiao’s confirmation that he’d signed for the fight last week and was just waiting on Mayweather to do the same, Mayweather announced on social media app ‘Shot’ (funnily enough a company he’s invested in — what a coincidence) last night:

I am glad my decision to meet with Manny and discuss making this fight happen helped get the deal done. Giving the fans what they want to see is always my main focus. This will be the biggest event in the history of the sport.

The announcement apparently caused the MGM Grand to fill every suite in the entire building over the fight period in less than three minutes – three minutes! That’s beyond ridiculous, and speaking of ridiculous, the fight purse has been split 60-40 in Mayweather’s favour; $150Million – $100Million. Yeah, that’s right, around $250Million dollars (£160 million) is riding on this fight. As for the actual fight tickets, word is the estimated secondary market price for the golden tickets will reach around £2000.

Will you pay £35 (or whatever it is these days) to watch Mayweather destroy Pacquiao on PPV and then feel massively let down that you waited all this time for a fight that was always going to be super one-sided? Course you will, and so will we. Can’t wait.

Take it away Pac: