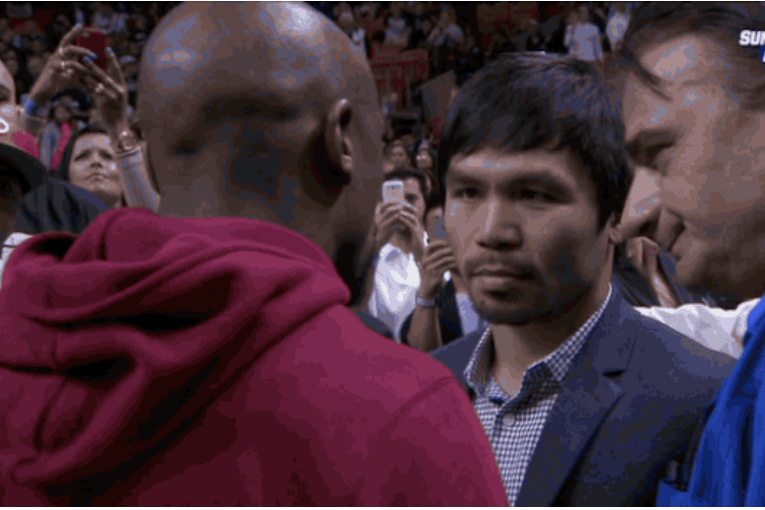 The speculation over whether these two are going to finally fight each other has reached the point where you just can’t believe anything you read about it anymore, but things definitely took a step in the right direction at the Heat/Bucks basketball game last night when the two came face-to-face for the first time ever.

The two approached each other at half time, and according to ESPN:

“He gave his number to me and said we will communicate with each other,” said Pacquiao, according to the Associated Press, adding that he had never before met Mayweather in person, although they have previously talked on the phone and Pacquiao once appeared on one of Mayweather’s undercards in 2001. Asked to clarify if the exchange meant the two would negotiate directly about meeting in the ring, Pacquiao said that was the case. “We did meet and chat but I don’t I want to say what we discussed,” Michael Koncz, Pacquiao’s adviser, who was with them, said when reached by ESPN.com on his cell phone during halftime. “It was a private discussion. They had a private, friendly discussion and that’s all I really want to say.” Koncz said their presence at the game together was “purely a coincidence.”

The Heat also had some fun with them on the big screen:

We’d like to welcome @floydmayweather & @MannyPacquiao to tonight’s game! pic.twitter.com/APMMeSCwat

Will they? Won’t they? We’re kinda tired of hearing about it to be honest. Just do something, anything. Have a reading contest or sing-off since you’re both into that kind of thing. Ideally though get in the ring and punch each other’s faces into dust for our enjoyment.