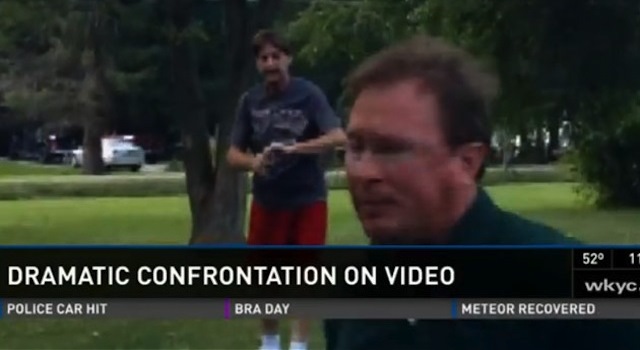 Unreal video footage has been captured of a man accidentally shooting his own wife while trying to shoot his ex-wife’s boyfriend. It’s complicated, but it’s all on video.

Don’t worry if that title confused you, because this is going to take some explaining.

Back on August 25th, Tony Malchak (in the green) was dropping off his daughter at his ex-wife Diane’s home when he suddenly got involved in an argument with Diane’s new fella Gary Schussler, who was drunk.

Molchak punches Schussler and Schussler responds by pulling out a gun. Molchak runs for the hills and all the while his new wife is filming this on her iPhone. Schussler kicks the phone out of her hand and appears to drop the gun as well. Molchak comes back and picks up the gun, and inadvertently shoots his own wife in the back. Crazy.

â˜› Watch Next: Man Shoots Himself In The Stomach