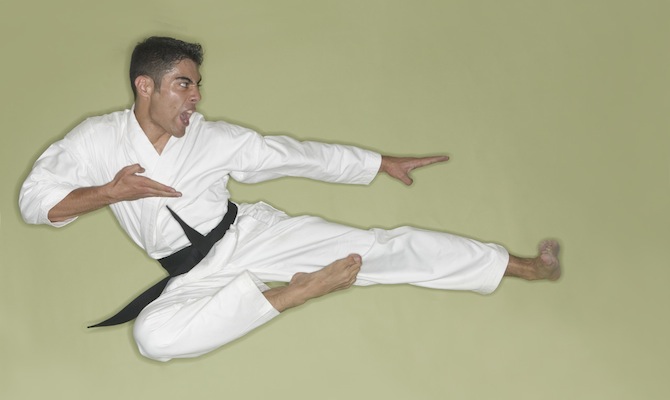 This dude is busting out kung-fu kicks for fun! Now I’ve never really known the difference between karate, kung-fu, juditsu, kickboxing etc etc, all I know is that Judo is the pussy one where you just throw your opponents around rather than roundhouse kick them to the face. I remember when I was in junior school and I did some whack judo class that involved everyone hugging and rolling around the floor together. It was really wet and I hope I never have to experience anything like that ever again. I’m a big fan of movies that involve bad ass kung-fu moves like Ong-Bak, there’s just nothing better than lighting up that big fat Sunday afternoon bifta and watching you rude boy Asian dudes taking it to another level.

This video features a rude boy Asian dude taking it to the absolute next level. This dude is performing a move known as the ‘Quadruple Kick’, and as you’ve probably guessed, it’s called the Quadruple Kick because it involves four kicks in one movement. I didn’t even know it was possible to do shit like this, I thought moves like this were strictly reserved for games like Street Fighter and Mortal Kombat, but no, turns out if you’re badass enough you can perfect these kinda moves in real life.

â˜› Watch Next: Russian Armour That Will Blow You Up

Imagine that you’re out in a busy sweaty club listening to your favourite selectah’s choose their favourite riddims (Waxxx tonight anyone?), and some dude balls past you and straight up knocks your double whiskey and coke out of your hands all over the floor. Now you usually wouldn’t be that bothered but you soon remember that you’re actually in London and the drink that’s just been knocked out of your hand costs you £16 after a wait a 20 minute wait at the bar that’s 5 deep. You’re pissed. You’re so pissed off (and pretty wasted) so you decide you’re going to teach this dick a lesson. You puff your chest up, ball over to this prick who’s just knocked your drink out of your hand and give him a s push on his back. ‘HEY PAL, YOU GONNA BUY ME A NEW DRINK DICK HEAD?’, bad move buddy. The next thing you remember is waking up in the bouncer’s medical room nursing a broken face and bruised ribs while the dude who just boshed you out is getting his dick sucked by your girlfiend. You just fucked with the wrong dude buddy. You just fucked up the dude who can do a quadruple kick.

â˜› Check This Out Next: Fighting