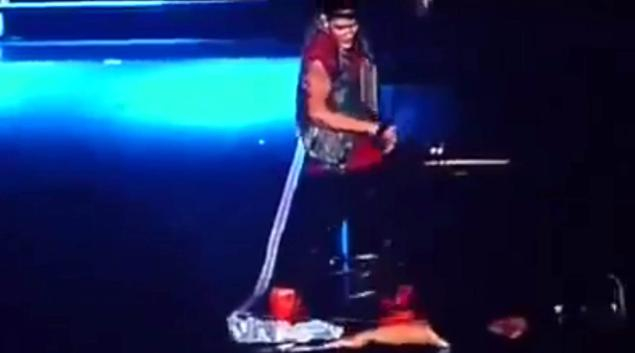 This is possibly the dumbest of a long list of dumb incidents that have taken place on Justin Bieber’s South American tour.

More drama from Justin Bieber’s South American tour today as he completely annihilated his reputation in Argentina by stamping all over their national flag, in what will probably go down as one of the dumber incidents on this tour. Considering he’s already slept with prostitutes and walked off stage after a bottle hit him, that’s saying a lot.

To put this in perspective, insulting the Argentinian flag is punishable by four years in prison for the offender. Of course, nothing like that will happen to Justin Bieber but it’s likely that everyone in Argentina will probably be pissed off about it. He also left the stage early at the show, claiming he was suffering from food poisoning and that he was ‘completely out of energy’. Apparently he spent eight hours on a drip before the show. Doctors told him to cancel, but he didn’t want to disappoint the fans so went on anyway, which was clearly a bad idea as all he succeeded in doing was pissing everyone off who had paid close to £200 to see him.

After the video surfaced yesterday, Bieber issued a lengthy apology on Twitter, claiming he didn’t understand that it was the Argentinian flag, which kind of makes sense but is still kind of lame: ‘Heard about what is going on with me down in Argentina and I’m shocked. I love Argentina and have had some of the best shows of my tour there. People throw stuff on my stage all show and I get it to the stage hands to get off so no one got hurt. That video I saw a bra and thought it was a shirt. I’m being told by my team it was a shirt but even if it was a flag I would never do anything to disrespect Argentina or the people of Argentina or the fans. I’m so sorry for anyone who took my actions the wrong way and I hope you can forgive this mistake. So once again to the people of Argentina, I’m sorry if that was taken the wrong way and I’m sorry for my mistake. I hope u can accept this. And I loved my time there performing for you and look forward to coming back. I gave my all and I know the fans did there too. Te amo. I would never do anything to disrespect my fans. I don’t like having to defend myself but this time it was needed as I mean no disrespect. So it is all love all around the world. Thanks, and to all the beliebers all around the world. I love you and thank you for always standing by me. Much Love to Everyone. Thanks.’