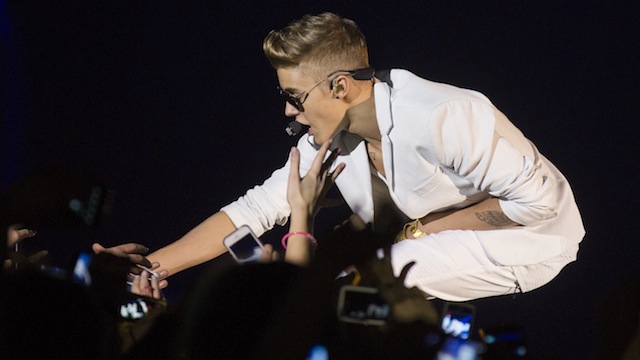 Justin Bieber took partying to new levels when he rode into Panama City for a concert.

This probably isn’t true, but it’s a really funny story and is being reported in one of Panama’s national newspapers called Cronicas – which is apparently at least halfway reputable – so there’s a good chance that there’s at least some truth in it. Given Justin Bieber’s recent exploits too it doesn’t exactly sound outside the realms of possibility.

A Panama City prostitute has claimed that she had amazing sex with Justin Bieber (even calling him a papacito in the sack) after he rocked up to a famous Panama City nightclub at around three a.m. He left fairly shortly afterwards with ten women, one of which was this hooker, who wishes to remain anonymous.

Bieber and the ladies went back to his hotel where he started kissing her on the nose and face and also smoked weed with her. So far that all adds up as the kind of stuff that Bieber would be getting up to. Things get a little weirder then when he starts conversing with the hooker. Here’s what he apparently said:

‘He asked me in English if I wanted all of his semen, but I don’t understand English. My friend was translating.’

I guess that could be quite easily lost in translation though, it seems pretty clear what he wanted to do from that phrase though, right? And that’s exactly what they did, as no sooner had he said that then they got right down to business and banged each other for an hour. Here’s the juicy details she divulged:

He has medium sized dick. ‘I didn’t say WHOA when I saw it.’

To finish off, Justin came on her tits. Thoughtful AND classy. Following this, he gave her $500 and sent her and her friends back to the club where he found them. Unfortunately, the prostitute wasn’t able to attend Justin’s concert the day after as she had to work as a whore somewhere else in Panama City – however she wasn’t too upset about this: ‘No, I couldn’t go because I had to work. But I was with him, which is much better than a concert.’

What do you think? Real or bullshit? It could quite easily be either, I feel like there must be some truth in it though or it wouldn’t have made it into Cronicas.