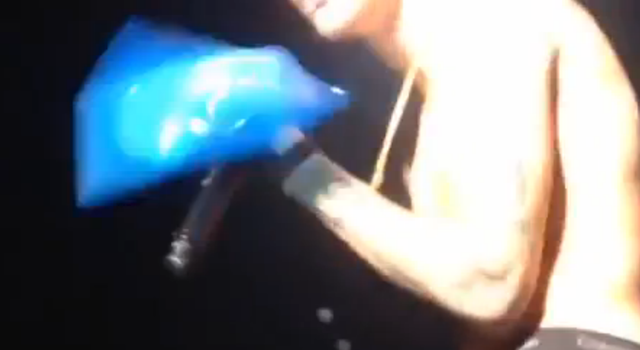 At a concert in Sao Paulo over the weekend, someone threw a water bottle at Justin Bieber and he reacted exactly how you would expect him to.

Justin Bieber incidents seem to be like buses – you wait ages for one and then three show up all at once. Following on from accusations that he hired a prostitute in Panama and was also frequenting a brothel in Brazil, he’s now walked off stage at a gig in Sao Paulo after being hit with a water bottle.

As is becoming one of his signature moves, Justin turned up to the gig at the Anhembi Arena about an hour and a half late, and was also over three hours later for a meet and greet with fans who have paid roughly $1000 for the privilege to meet him. Once he started performing he then kicked and stamped on a Brazilian flag that someone had thrown onto the stage, which is hardly they way to endear yourselves to Brazilian fans.

Following on from this, someone threw a water bottle at him near the end of the show (I think there were around 30 minutes left) that hit him on his hand and knocked his microphone out of it. Instead of just getting on with the show, Justin just gave the crowd a steely look and then turned and walked off stage. Fans waited for him to return – and even started singing Baby on their own – but he never came back and the crew started breaking down the stage about 45 minutes after he walked off.

Now, I totally agree that have bottles thrown at you isn’t a good way to spend your time, but it sounds like Justin Bieber was being a complete douchebag all the way through the show and in its build up (what’s new?) so I’m not really that surprised that someone threw a bottle at him. I think he probably should have manned up and finished the show that he was getting paid millions of dollars to perform though.

Also it’s not even like the water bottle hit him in the face or anything, it only knocked the mic out of his hand which is hardly a huge deal. Freaking pussy. I have got to admit though that the look he gave the crowd is pretty badass and the way he just walks off without saying anything is kinda badass too. However, he’s still obviously a dickhead, although for once in his life he did make looking like a dickhead look good.