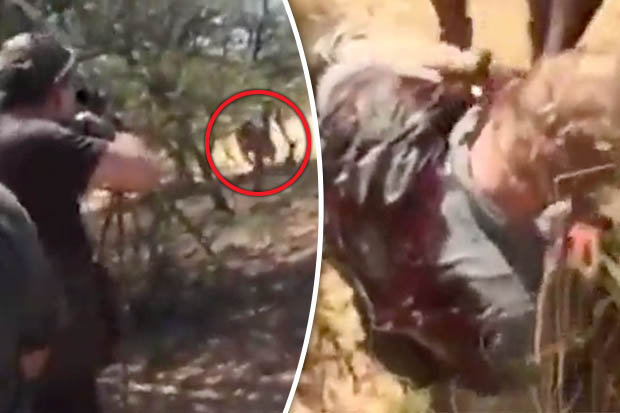 A video has emerged online showing a big game hunter getting savagely mauled by the lion he was trying to kill.

In the footage you can see the lion appear from the distance before charging towards the group of hunters. Several shots are fired and the lion is sadly killed, but not before he manages to take a chunk out of one of the shooters. It’s only near the end of the video that you see the extent of his injuries:

Ouch – that looks painful. The video has received over 27,000 views since popping up on LiveLeak earlier this week and let’s just say the viewers were not exactly sympathetic. Here are some of the comments:

Here’s a thought, don’t hunt lions or anything else you won’t eat.

F**king idiots. You get what you deserve.

First rule of Africa. Don’t f**k with the wild life.

I have to agree with those statements. It’s one thing killing animals out of necessity (i.e. to eat) but it’s another to kill them in their prime all in the name of sport. RIP to that lion.

For the time a big game hunter got trampled to death by an elephant, click HERE.