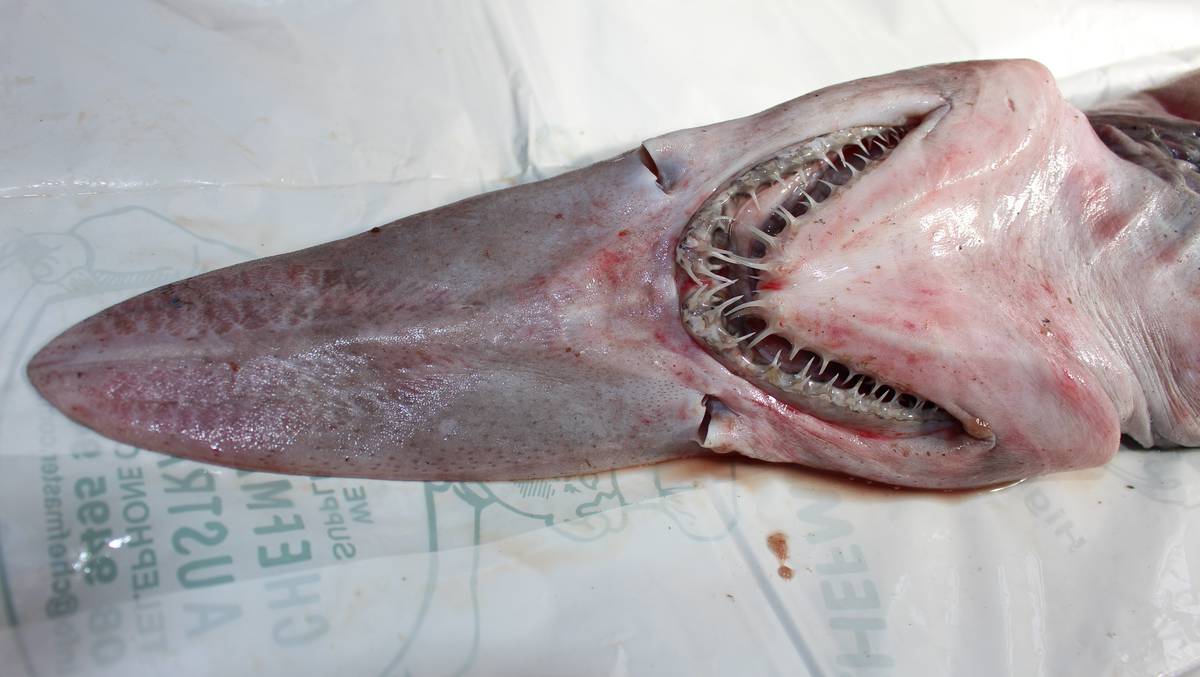 Sharks are amazing it’s true, but I still don’t want to be anywhere near them.

I’ve tried to warn you lot not to go into the water plenty of times. Stuff is weird down there. You don’t seem to be listening to me, so here’s your next installment of “WTF is that under the surface?”

Sharks evolved around 450 million years ago in the Ordovician epoch. To put that into perspective, the first sharks were roaming the ocean before most land plants were born, i.e. sharks are older than trees. Now that’s deep.

Once you’ve understood just how old these things are, it’s no surprise that there are so many weird versions in today’s seas. Here, for your viewing pleasure, are some of the weirdest sharks that evolution has managed to puke into the real-world: 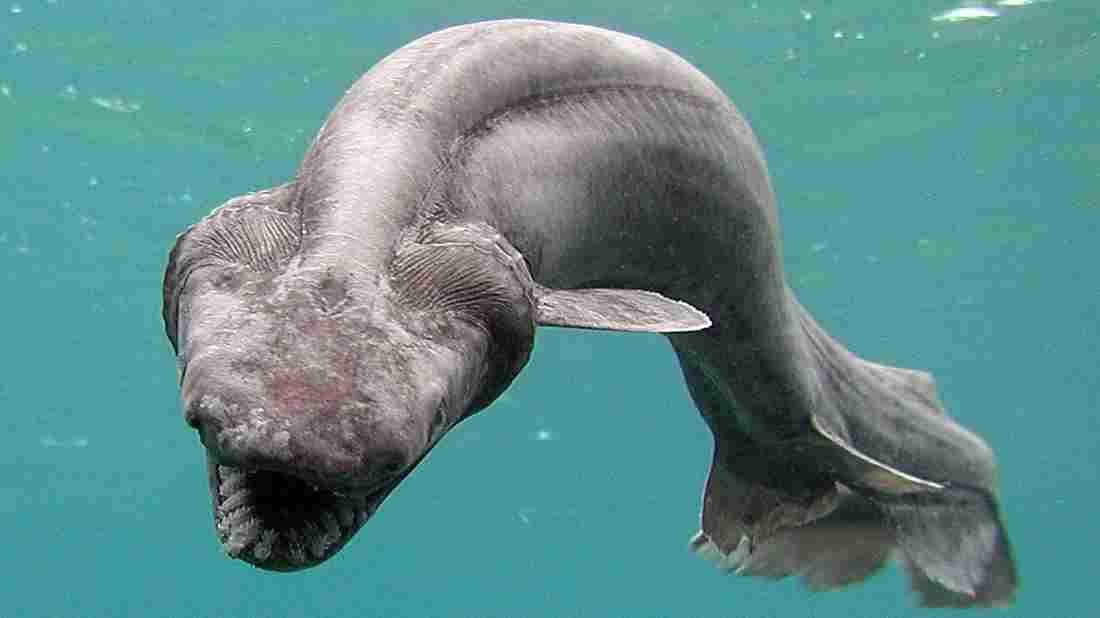 What the holy moly was going on when this thing was designed? Lord only knows. The frill shark is a 2 metre long eel-like monstrosity. It has been dubbed a living fossil thanks to its primitive looking adaptations. They’re rarely spotted by humans because they prefer to hunt in the depths, often a mile or so down.

It has highly flexible jaws and eats its prey whole, fortunately for us, that flexibility isn’t quite enough to squeeze an entire human in, so they pose no real threat to us. Having said that, the hundreds of needle-shaped teeth it sports would probably do you some damage if they got half a chance: 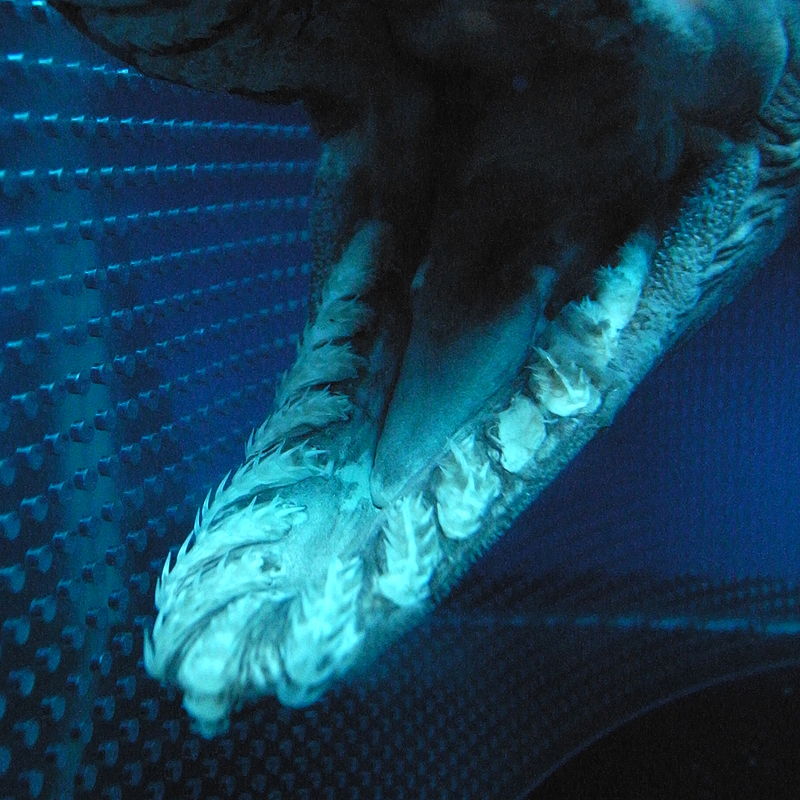 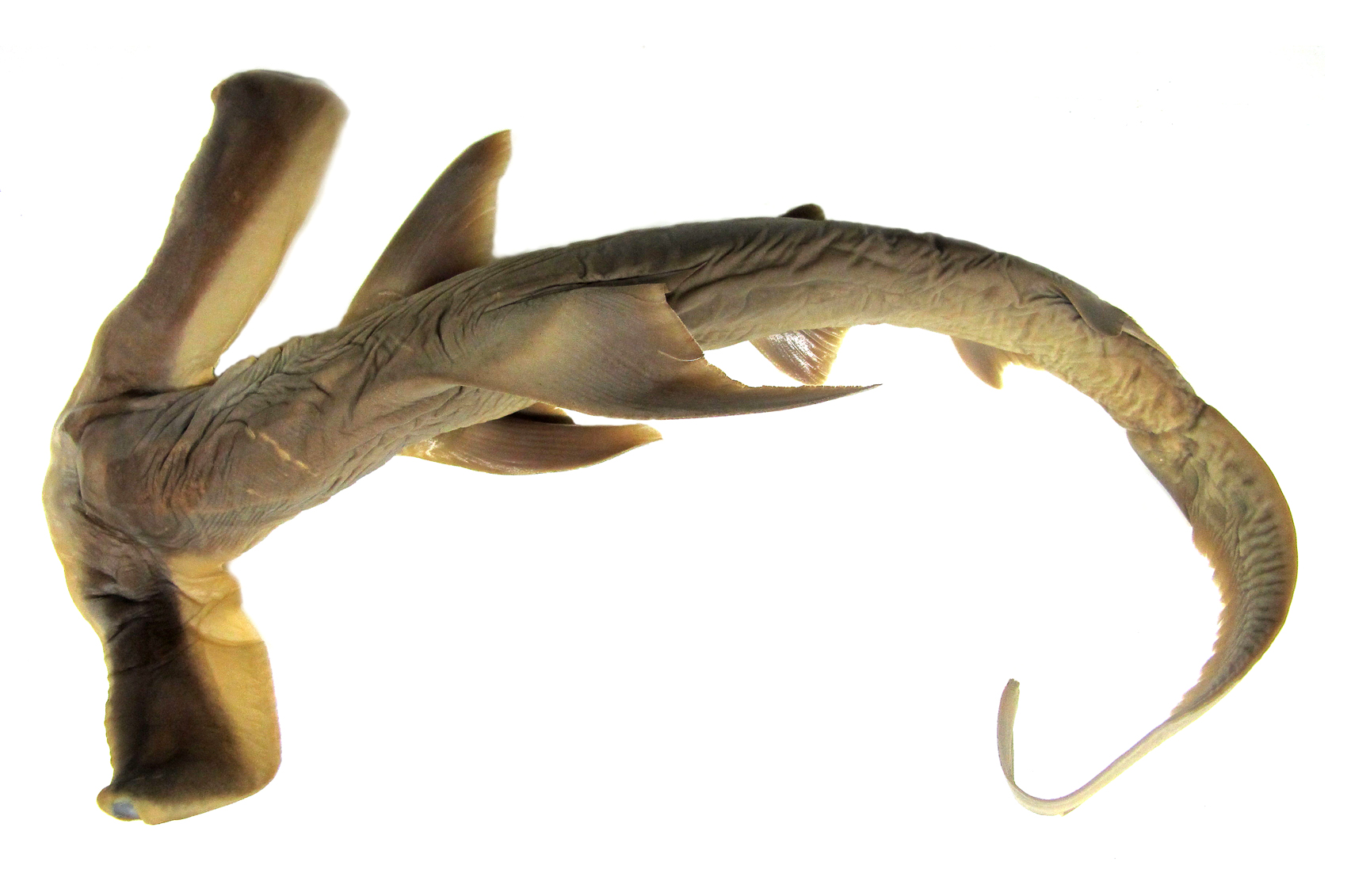 Sure, we’ve all heard of the hammerhead shark, but its cousin, the winghead, is less familiar. They’re not as big as some of the other sharks we’ll meet today, but at well over 6 ft long I don’t fancy my chances.

Like the hammerhead, the weird shaped bonce is thought to help it find its dinner. Wingheads have electro-sensitive pores all along their winghead which detect the tiny electrical output of the muscles in its prey. Many sharks use this method of hunting, but the additional sweeping motion of the large wing probably helps pinpoint its prey more effectively.

Winghead sharks have the largest nostrils of all the sharks. Some scientists believe that, because the nostrils are spread so far apart, it might be able to smell in stereo, enabling it to find prey easier from greater distances.

They’re harmless to humans, but unfortunately humans aren’t harmless to them, so they seem to be on the decline. Naughty humans. 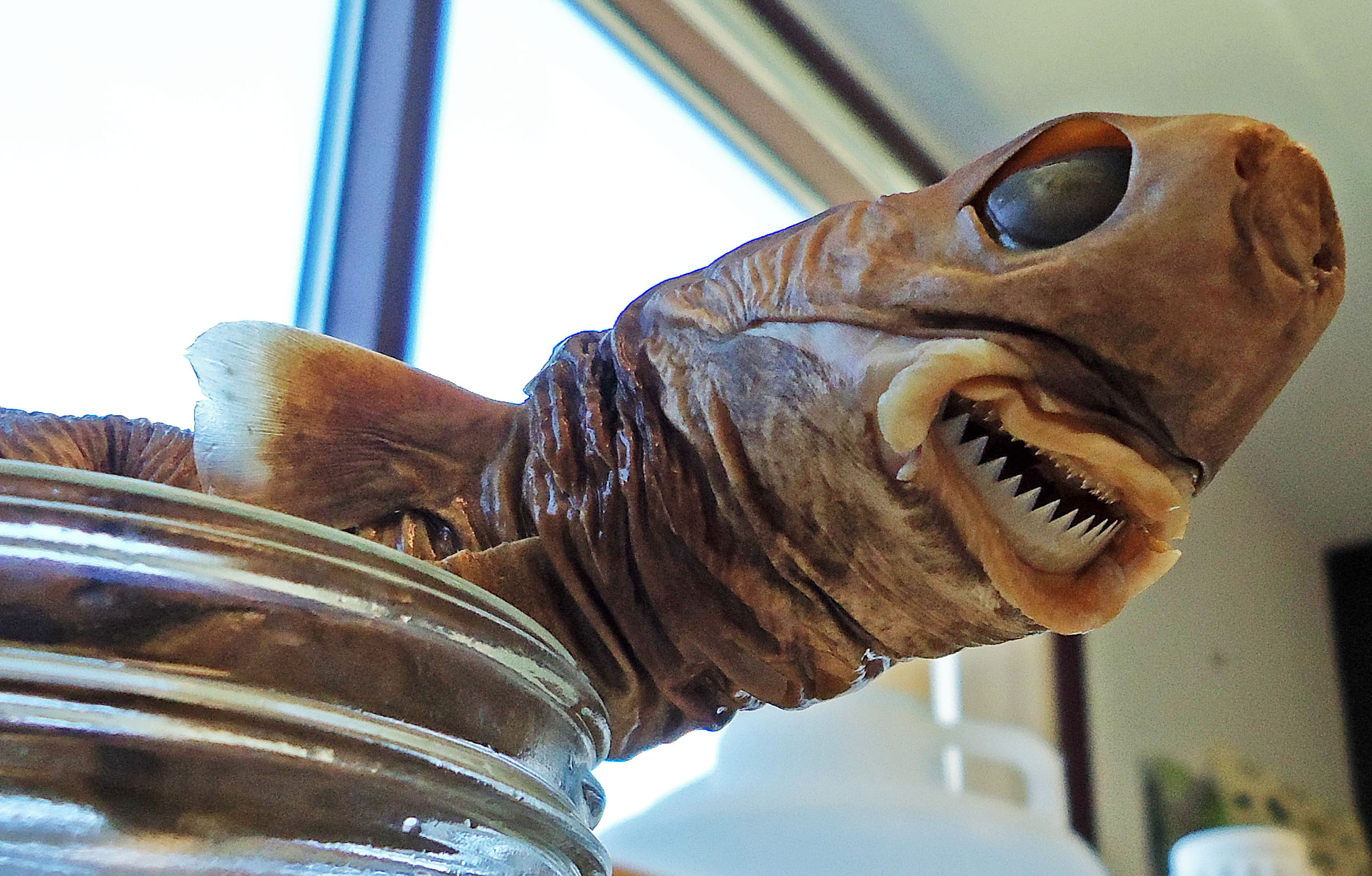 Although relatively small, the impressive weaponry in the face of these sharks can do some real damage. They clamp onto much larger prey than themselves and then rotate with fury to extract huge chunks of flesh. Like these:

They don’t have a lot of muscle power, but they don’t need it with razor-sharp teeth like that. Because cookie cutter sharks tend to live pretty deep down, humans don’t have to worry about them, although there have been occasional reports of people having flesh removed by them. Steer clear. 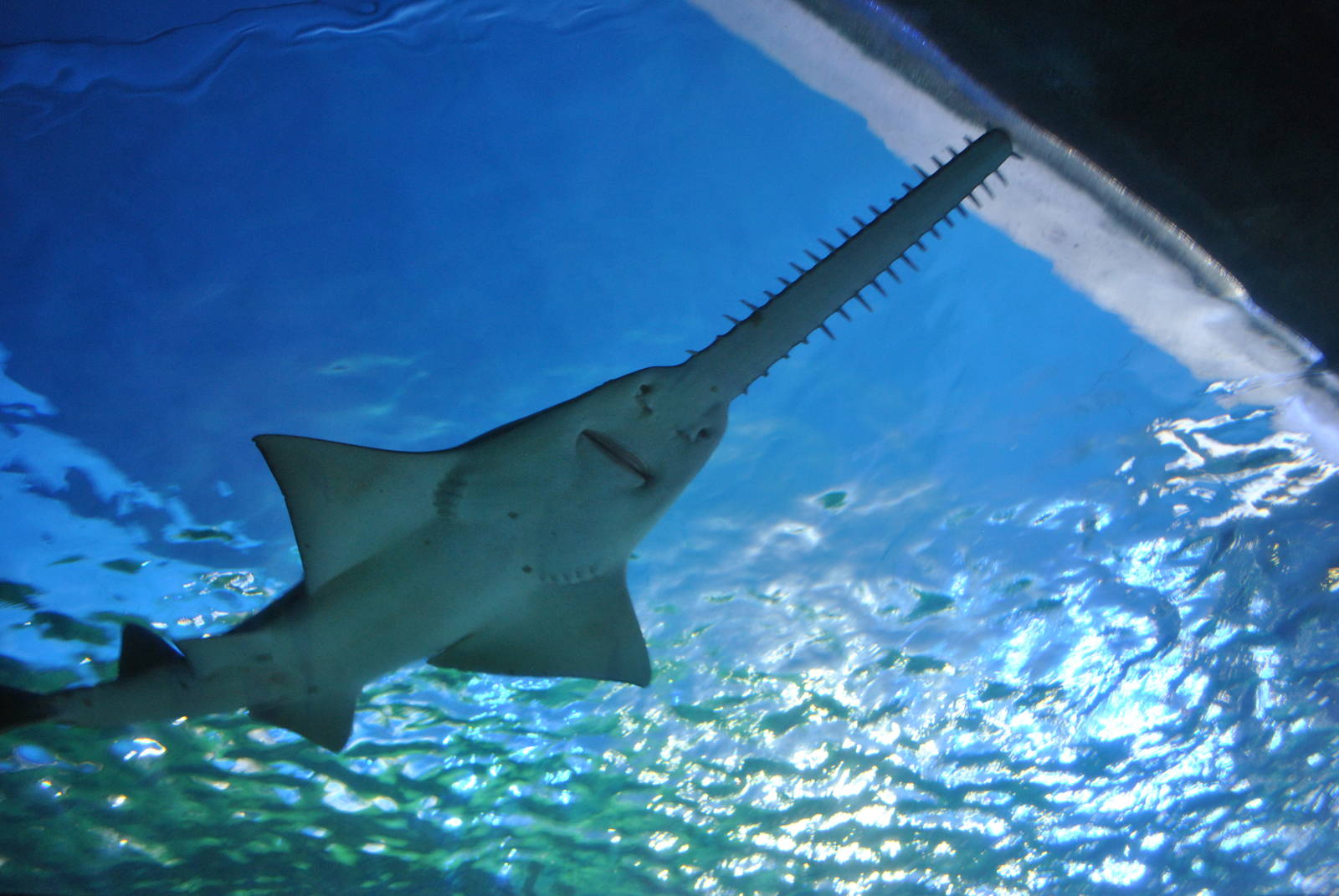 Sawsharks aren’t as dangerous as they look. I still don’t recommend going in for a hug though. They can reach almost 6 feet in length, and although they won’t hunt humans, you don’t want to get anywhere near that spiky nose of theirs. They’ll cut you in two. Probably. 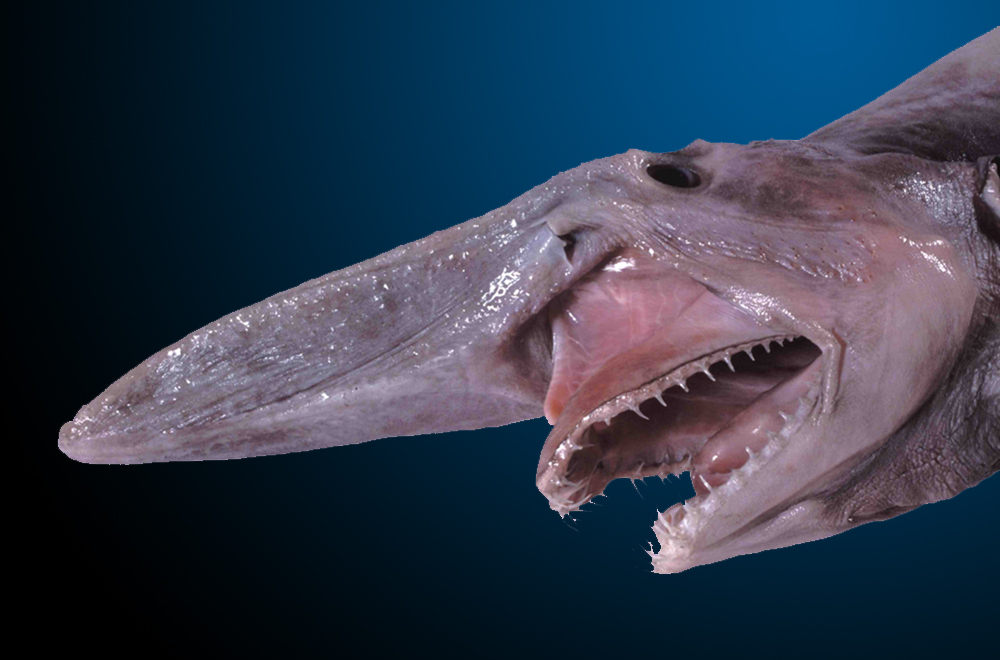 If this was a competition for weirdest looking shark, I reckon the goblin shark would win. It’s so weird. They have an ancient design and can grow well over 4 metres in length given half a chance. The goblin shark’s long and creepy looking nose is covered in electro-sensitive pores which help it catch supper in the darkness of the deep ocean.

To add an extra twist to its odd look, the goblin shark can extend its jaws outwards to catch prey, exactly like the alien from Alien. Stuff of nightmares. Check this out:

Humans rarely come across these deep dwelling fish, and little is known about how they live their lives. In the past a couple of individuals have been captured and put into aquariums but they rarely live longer than a few days. 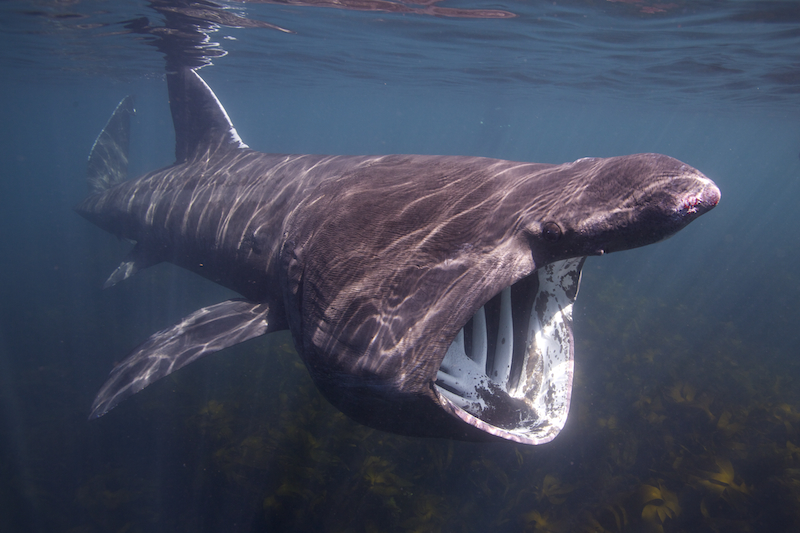 This is another one that looks way worse than it actually is. It’s the second largest shark in the world, the biggest ever measured was over 12 metres in length. Yes, that’s longer than a bus. Luckily for you and I it only eats tiny things. That massive mouth of his scoops up vast amounts of water and filters it for plankton, crustaceans and small fish.

Whether these things have got the jaw power to chew down on me or not, I am not going anywhere near one. They look terrifying. 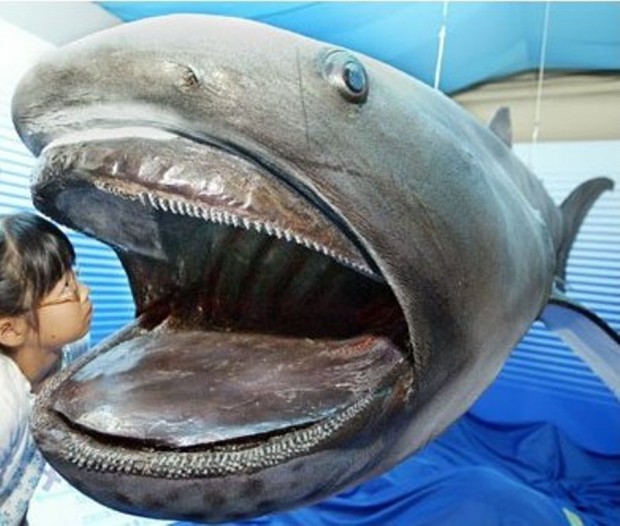 Like the basking shark above, megamouth’s mega mouth is only for filtering little things out of the sea. They won’t take your arm for a laugh. Megamouth sharks are pretty rare, there have only been around 60 confirmed sightings of these quiet, solitary browsers. Most sightings are of dead ones unfortunately.

At up to 18 metres in length, I’m not that keen on swimming alongside one. Here is one of only three video clips of a live megamouth shark:

Weird, huh? Creeps me out a bit, the way it’s gorping at the camera. To be fair, it isn’t particularly aggressive looking is it? Maybe I would chill out with one for a bit. 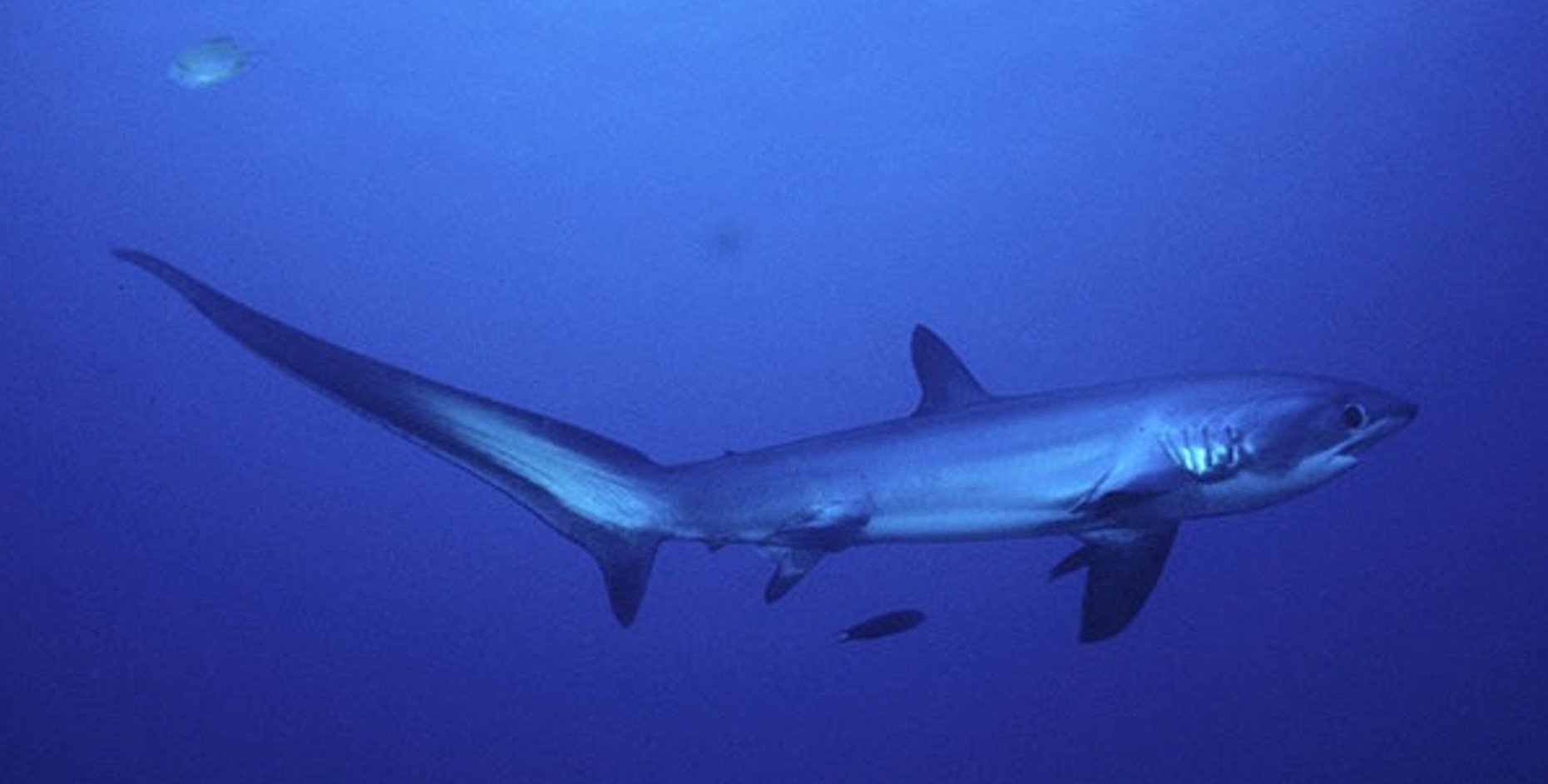 Thresher sharks have got the most seriously pimped tails on the market. For quite a while scientists were perplexed as to what the deal was with their massive whip-like extension. Recent observations seem to have at least partly cleared up the debate. Slow motion footage of thresher sharks hunting show that they use the tail to make a whipping motion near to their prey.

The force of the whip is so intense that it can stun, and sometimes kill their prey. The tip of the tail can reach around 90 mph. That’s an impressive feat. Here’s one in action:

You have to give sharks their due; they’ve been on this earth longer than pretty much anything else alive today. They look weird, they’re brilliant at killing and they’re mysterious. What’s not to like? Still, as amazing as they are, I think I’ll enjoy them from afar. I’m not keen on ever, ever floating about in an ocean that contains that little shop of horrors.