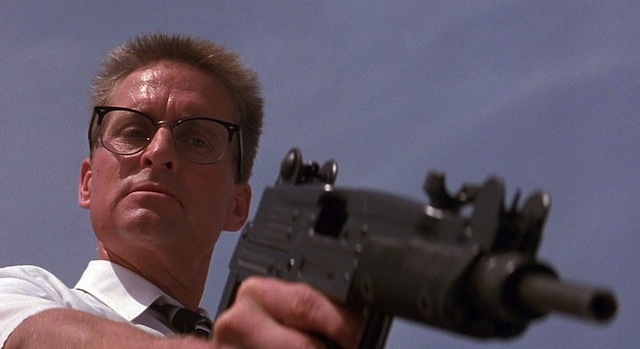 What happens when you mix pissed-off weirdos with readily available firearms? A whole lot of bloodshed…

Have you ever had one of those days when you get out of the wrong side of bed and things just go downhill from there? You burn the toast, you’re out of clean underwear, and you get to the bus stop just in time to watch your transport to work vanishing into the distance. Then there’s the asinine conversation with work colleagues, the constant nagging from your significant other, and the fact that Made In Chelsea exists.

As soul destroying as these things can be, the majority of us manage to grit our teeth, bitch about it for a while, and get over it. But for some people, having a good moan just isn’t going to cut the mustard. For these lost souls, the only solution is to stock up on firearms and hit the streets for a horrifying murder rampage…

Delgado was born Chinacota, Colombia, in 1934. At the age of seven, he saw his own father commit suicide and spent the remainder of his life blaming the tragic event on his mother, of whom he became increasingly resentful as the years went by. In 1970 Delgado served in the Vietnam War. According to his few friends, the experience left him jaded and antisocial (because, let’s face it, it probably wasn’t exactly a trip to Centre Parcs).

Fast-forward to December 3, 1986.  At midday, Delgado strolled into his local bank, closed down his account, and withdrew his entire life-savings of $50,000. What he did with the remainder of his penultimate day on Earth is unclear, but I would bet that it wasn’t spent smoking weed and listening to ambient music. The following morning, he purchased a .32-calibre revolver and 500 rounds of ammunition and travelled to the home of a young girl he tutored in English. As you have probably guessed, he didn’t go over there to help her with revision.

Delgado stabbed the girl and her mother to death with a hunting knife before returning to the apartment he shared with his own hated mother. After a heated argument, Delgado stabbed her in the neck, then wrapped her body in newspaper and set it alight. He then grabbed his revolver, the knife, and a briefcase of ammunition, and began to make his way around the apartment complex, yelling ‘Fire! Fire!’. After gaining entry to people’s homes on the pretext that he needed to call the fire brigade, Delgado would shoot the occupants at point-blank range in the head. After dispatching another six victims in this manner, Delgado fled the apartment block, which by this point was completely ablaze.

Clearly feeling peckish after his exertions, Delgado did what any self-respecting mass murderer would do in the middle of a killing spree: he went to his favourite Italian restaurant. Having consumed a cheeky bottle of red and a spag bol (no kidding), he grabbed a perch at the bar and began drinking cocktails. At around nine PM, Delgado began to open fire on diners in the packed restaurant, shooting 32 people, of whom 20 died. By this point, the slow, crappy arm of the law finally caught up with Delgado, and he was shot in the temple by a police officer, bringing his murderous rampage to an end. He had killed 28 people. So remember, next time you’re in Frankie & Benny’s, just keep an eye on that weirdo at the bar…