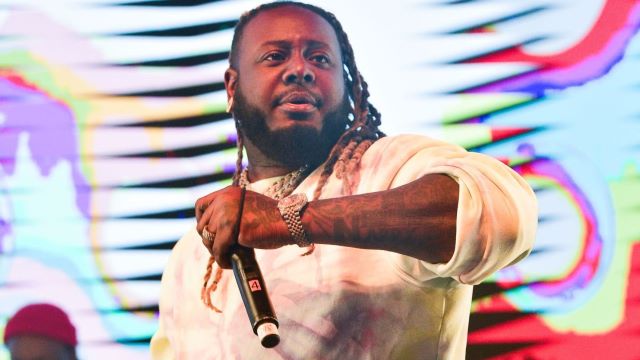 He woke him up on a flight to have a go at him.

Even with his irksome use of autotune, there’s no denying that T-Pain made some absolute bangers back in the day. What’s more, he also seems like a really nice guy who just loves music.

Well it looks as though some of T-Pain’s peers didn’t really appreciate him popularing the autotune trend and turning the industry upside down in some respects, and one of his idols/friends Usher let him know it in no uncertain terms during a flight back in 2013…

Wow, imagine waking a guy up from his slumber 35,000 feet in the air just to tell him he ruined the entire music industry. Just so mean and unnecessary! Here’s a transcript + more that isn’t shown in that footage…

I chuckled a little bit, it was a nervous chuckle but I chuckled. I didn’t understand. I thought he was joking at first. And he was like, you really f***ed up music for real singers.

Confirming Usher was referencing his use of autotune, T-Pain said:

I’d used it, I didn’t tell everyone else to start using it.

The criticism really hit T-Pain hard, and he says it sparked a four-year depression…

Literally at the point, I couldn’t listen. Is he right? Did I f*** up music? And that is the very moment, I don’t even think I realised this for a very long time, that was the very moment that started a four-year depression.

He added that every time a troll targered him on the internet, it would take him right back to Usher’s hurtful comments…

It was a sucky f***ing moment. I felt like everybody just hated me. Every time I saw, uh, a troll having his day, or somebody just f***ing with me, I always think back to when Usher said I f***ed up everything. And I’m like, maybe I am a big f*** up.’

The good news for T-Pain is that he kept making music and has had plenty more autotune successes since then, so it can’t have put him off that much. He was probably a bit surprised to see Usher use autotune himself on the 2010 hit OMG with Will.i.Am too. What a hypocrite!

Well anyway, I doubt Usher intended to make T-Pain feel that bad about himself, but it is a sentiment a lot of people shared to be fair. Although it’s not like there aren’t plenty of real singers still doing their thing and becoming wildly successful, so maybe Usher was overstating the problem a little bit. Go T-Pain Go!

To watch T-Pain wipe out an entire team of racists on Call of Duty Warzone, click HERE. Dude’s got skills.