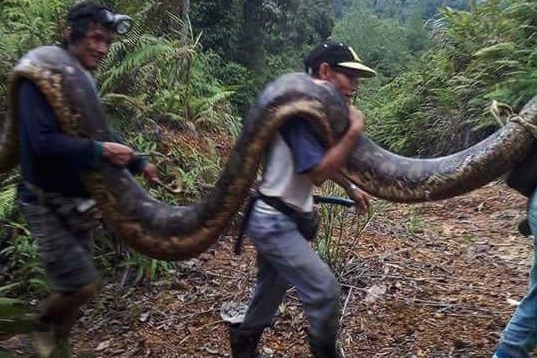 Talk about ruining a moment of intimacy.

The video comes courtesy of some people on the Malaysian Island of Borneo who were out hunting when they heard some really strange noises coming from inside a tree. They used a chainsaw to cut into it and lo and behold found the two pythons in there going at it.

Despite the fact that this really was a sight to behold, the villagers weren’t really that bothered as python is a delicacy over there so they just killed it and then carried both of them back to their village to cook up for everyone. Apparently the snake was so big that it took about seven people to get it back to the nearby village of Bintulu. 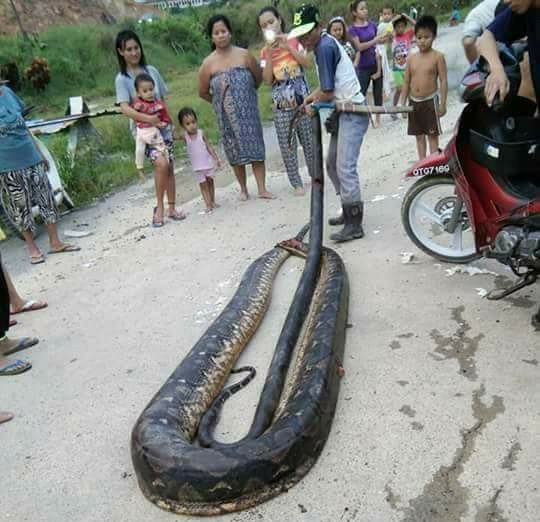 Here’s what villager Tinsung Ujang had to say about the incident:

I looked down into the hole in the wood and was surprised to see the female mating with a smaller male snake.

We had to split the timber to reach them and it was difficult to remove the snakes because of their size and the position. They were locked together.

I was even more surprised because I have never seen snakes mating before and never seen a giant python that was more than five metres long like this. The male python was quite small.

It was an amazing occurrence and I proceeded to shoot the two reptiles because for our community it is an exotic dish that is also our favourite dish.

The snake meat was then divided and its share was distributed equally to villagers and nearby farm workers.

What a great community. I’m kinda surprised they didn’t make more of the two grossly disproportionate snakes eating each other, but I suppose when you catch a local delicacy like that you’re not gonna think twice about eating it. Yum.

For more of the same, check out this giant snake learning how to open a door. Terrifying.