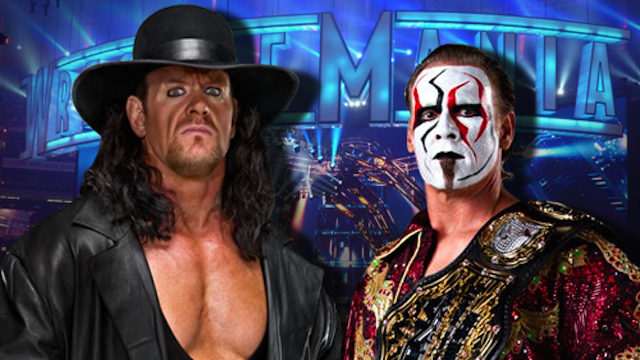 Well this is something that is undoubtedly going to make wrestling fans all over the world mark out like they’ve never marked out before.

Sting was speaking exclusively this week to the Daily Mirror to hype his appearance in the new WWE video game WWE 2K15 (seems like a completely inappropriate place to do an exclusive interview about this but hey whatever) and he revealed that he dreamed of working with the WWE and in particular had his heart set on a match with the Undertaker next year at Wrestlemania 31.

Wow told you you would mark out. Here’s what he had to say exactly:

‘Why now? It’s a now or never thing. I’ve done so many things in the wrestling business but the one thing I’d never done was wrestle or be a part of the WWE family. I didn’t want to hang it all up and retire and disappear again without having done that in some capacity.

‘I’ve made it clear I’d love to have one last hurrah, one last big match hopefully. And of course I’ve been outspoken about Undertaker being the opponent. I know what happened at WrestleMania where Brock Lesnar broke his streak. I think, or at least I’m hoping, that Taker’s still going to come back and that he’s not done. If he’s not done, and he would consider doing it, I’d love to work with him one time. I’d love to wrestle him one time before I call it quits.

‘All for it, just put it that way. I’m all for it. Undertaker maintains a status in wrestling and the WWE that is second to none. He’s a phenomenon. How about San Francisco, 2015, in April?

‘It’s a no brainer that the Sting-Taker match will be a popular option – that’s one way the fans can make that match happen. I always wanted to work with the likes of The Rock, John Cena and Randy Orton so I can’t imagine wrestling fans won’t want to do the same thing.’

Sounds like Sting might be in it for the long haul, despite being a 55 year old veteran these days, although he might not want to go toe to toe with The Rock, considering the Hercules diet he’s just been on.  You can’t tell me you wouldn’t want to se him wrap Undertaker into the Scorpion Deathlock or hit him with a Scorpion Deathdrop though can you? It seems obvious ‘Taker would win given his WWE heritage, but man it would still be a real honour to see those two go at it in the ring.

You can check out a video hyping Sting’s appearance (2 generations of Sting as a playable character, although it seems you only get him if you pre-order the game!?) in WWE 2K15 below: