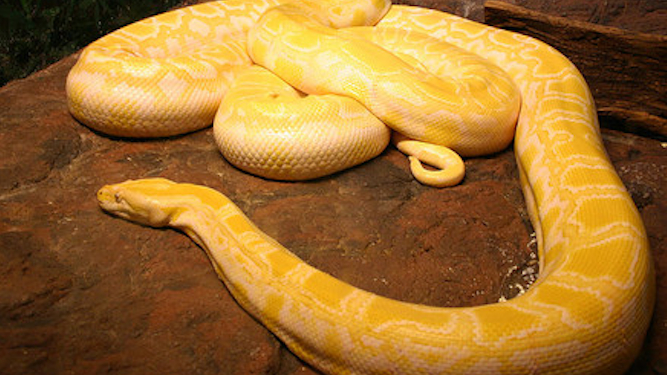 This will probably give you nightmares for the rest of you life, I mean if you can’t trap a giant snake in your closet where the hell are you gonna hide from it?

I wouldn’t say I was overly scared of snakes but this is probably because there aren’t many snakes around England so it’s very rare that you ever see one, so there’s no real reason to ever get scared of snakes. It’s not like I’m Indiana Jones you know? I’m pretty sure if I lived in the jungle or wherever they hang out though they would probably be near the top of my list of fears though, for definite because they are freaky little weirdoes.

After saying that though, this video still has me pretty much terrified. I don’t know anyone who has a pet snake but I don’t think I would have ever been that scared of them if I did, mainly because they would probably keep it in a huge container that I doubt they could have ever escaped from. Even if the snake did escape I would just close the door and leg it out of the house so there was no way the snake could ever have got me, as there was no way a snake could open a door right?

Wrong. Just like the Daleks managed to conquer stairs by inventing some kind of hovering device that let them get up them, snakes have managed to figure out how to open doors. When I saw the title of this video I figured that the snake would have just banged into the door and nudged it open while it was slithering around on the floor, but no, this is way more terrifying than that. WAY MORE.

Somehow the snake – who is called Julius – has managed to balance on its tail (does a snake have a tail as it’s technically all tail right?) and effectively stand up straight and turn the doorknob. It’s freaky. What’s perhaps even more scary though is that the person filming the video is all like ‘good  job’ after the snake opens the door, which kind of implies that they were training the snake to do this. Why the hell would you train a snake to do something like that unless you were up to no good? I’m keeping all my doors locked from now on, all the time.

Snake That Looks Like A Giant Penis Discovered In Brazil