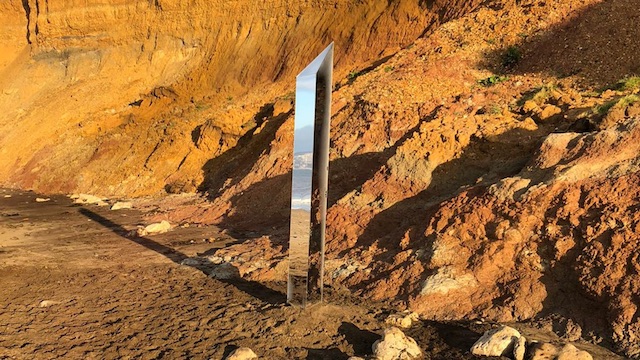 Remember before all this Tier Four nonsense when everyone was talking about all these weird monoliths that were appearing all over the world and it seemed like these were the biggest of our problems now that we had started to roll out the vaccine?

Seems like a long time ago doesn’t it – I haven’t even thought about the monoliths for a couple of weeks and had completely forgotten about them to be honest, although I do remember being pretty disappointed to find out that they all seemed to be pranks from local artists performed independently of one another. Really did feel like something super weird and global was going on for a little bit didn’t it?

Anyway, one of the first people to come out and admit that it was a prank was 29 year old artist Tom Dunford, who claimed responsibility for the one that appeared on the Isle Of Wight. An unknown person saw the monolith ready to be transported away to be destroyed and instead decided to sell it on eBay: 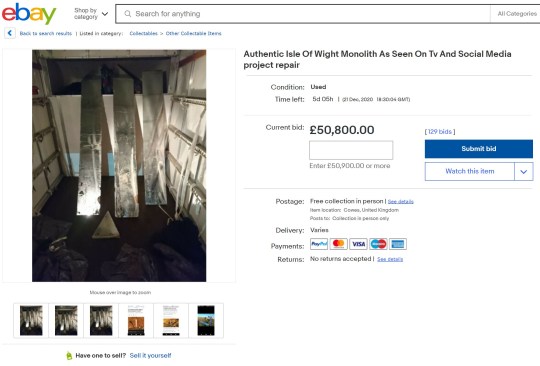 This is not stolen, I will explain how I came to obtain this.

I live on the Isle of Wight and was returning home from a job. We were going to pass Compton car park en route home so we thought we would take a look at the famous monolith.

Unfortunately the monolith was in a sorry state and being loaded onto the back of a National Trust pick up truck.

I made an offer to purchase the monolith direct from the National Trust staff in the form of a cash donation.

Bids went as high as £65,000 last week, but most of these were not serious and it ended up being sold for £810. Bit of a wounder. The money will be donated to charity and the winner will also receive a meeting with Tom to discuss the piece, although who knows when that will happen as it looks like the whole country is heading into lockdown fairly soon.

In the meantime though, I’m sure that the mystery buyer will be completely buzzing to have spent £810 on a monolith that they can put in their garden. Sure that’s gonna be a good one at parties. 2020 is crazy.

For more of the same, check out the explanation for the original monolith in the Utah desert. Bit of a party pooper as well.