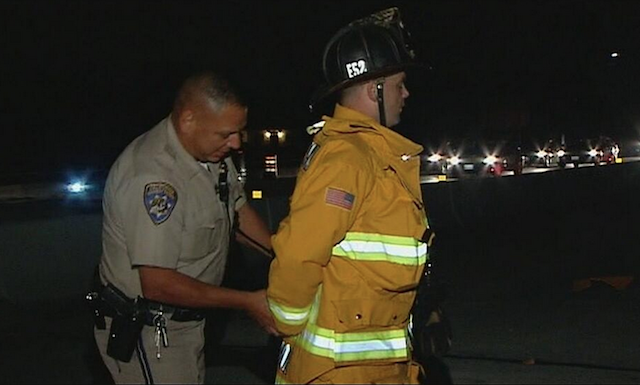 While two people were trapped in an upturned car, this policeman saw fit to arrest a fireman for parking his fire engine in the middle of traffic.

What’s that Mr. Fireman? There’s an upturned car in the middle of the road with people dying and screaming inside? You’re here to rescue them? No problem, please make sure your emergency vehicle is parked appropriately first so as not to disrupt traffic any further. There may be lives at risk but rules are rules after all.

This totally happened in California after an argument broke out between a California Highway patrol officer and firefighter Jacob Gregoire as they clashed over where the fire crew’s fire engine should be stationed before saving the victims of a car crash. The fire truck had parked along a centre road divider, close to where the car had flipped over and behind an ambulance. As the policeman argued with Gregoire, other emergency crew were able to tend to the two people trapped inside the car.

â˜› Up Next: Firefighter Brings Kitten Back To Life

It’s police officers like this guy, and this guy and this guy, who make life as a policeman so hard for the good cops out there. Believe it or not there’s police out there who are just doing their job, who want to protect people and get home in one piece themselves. They’re not all power-tripping jobsworths. But yeah, this guy needs to find himself in an upturned car one day and have a bunch of firemen firehose the shit out of him, maybe he’ll change his tune then.