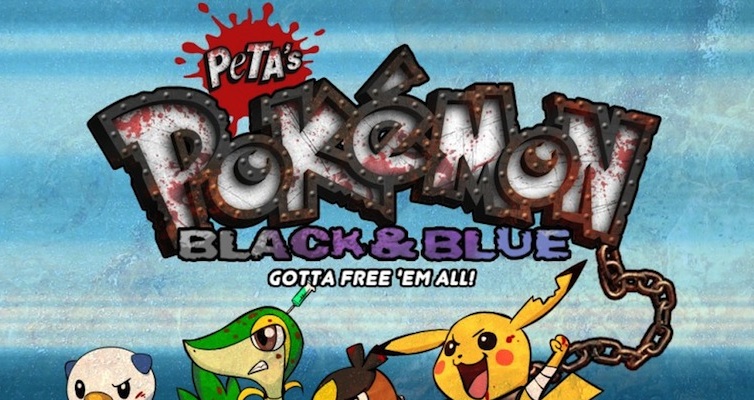 Peta (People For The Ethical Treatment Of Animals) have waged war on POKEMON. Y’know, ‘gotta catch ’em all!’ and all that business.

Peta (People For The Ethical Treatment Of Animals) have waged war on POKEMON. Y’know, ‘gotta catch ’em all!’ and all that business.

In an apparent state of mild insanity, Peta have started full on beef with Pokemon in response to a new game released recently (Pokemon: Black & White 2) that – according to Peta – condones animal abuse.

Peta released this statement regarding the issues:

“The amount of time that Pokemon spend stuffed in pokeballs is akin to how elephants are chained up in train carts, waiting to be let out to ‘perform’ in circuses,”

First of all, let’s get something straight, Pokemon and Pikachu ARE NOT REAL. No animals have ever been used, or hurt, in the making of any Pokemon game of TV show.

Peta have even gone as far as developing an online game entitled ‘Pokemon: Black & Blue’, with the catchphrase ‘Gotta free ’em all!’ that involves the Pokemon battling their trainers for freedom (check the game out at the end of this post). Players are given choices about how to “use attacks to exploit a Trainer’s weakness,” including group hugs, protests, quick attack, and thunder shock. How fvcking lame does that sound.

For generations, Pokemon have suffered at the hands of their cruel trainers. Help Peta free Pikachu and his Pokemon friends as they struggle for Pokemon liberation.

Peta have obviously lost the plot and should probably be using their time and resources more productively. Did you know that Peta started beef with the producers of Nintendo’s Super Mario 3D Land for dressing Mario in a fur suit? Serious. If you check out Peta’s Wiki page you’ll see that in 2009 they made $34 million revenue, big bucks. This is why they can afford to blow a load of cash on stupid games that do nothing but prove how mentally retarded and out of touch with reality they really are.

â˜› More: Vintage Footage of a Monkey Jockey Riding a Greyhound Like a Horse

Here’s the game for you to check out for yourself: