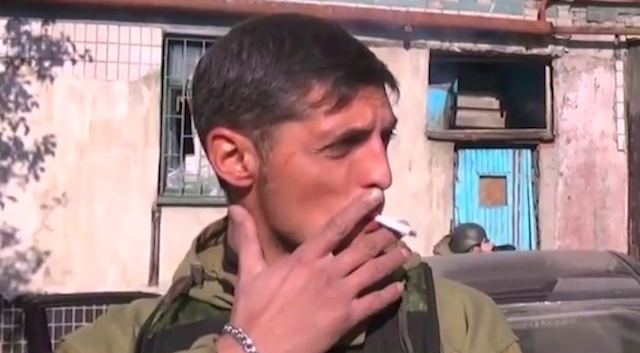 Just casually smoking a cigarette whilst everything around him gets bombed to hell.

Over in Ukraine the Novorossia rebel army are still fighting Ukrainian troops for control of the Donetsk airport, and the man in charge of the rebel army just so happens to be one of the most badass men on the plane – even more badass than this guy who grabbed a tear gas canister and throw it back at riot police.

I guess you have to be when you’re involved in a conflict like this. He demonstrates it perfectly in the video below where he just acts as cool as fuck whilst everyone else is going absolutely mental due a nearby rocket strike. He doesn’t even flinch and just causally smoke a cigarette, like something out of Terminator or something.

With this guy in charge, it wouldn’t surprise me if these guys keep fighting for a long time as he doesn’t strike me as the kind of guy who’s going to roll over anytime soon. He kind of reminds me of a real life version of McBain from The Simpsons – check out the full version of his movie here if you missed it.