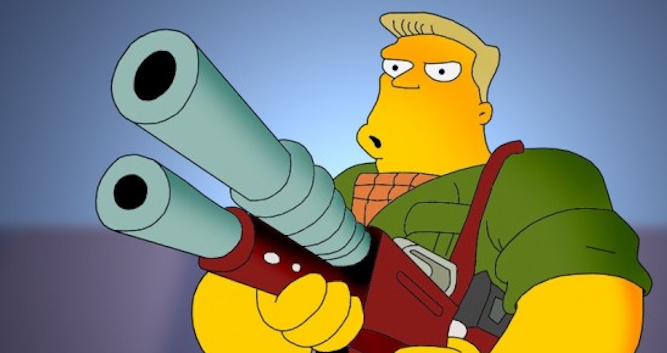 Who knew that the writers of The Simpsons were such complete badasses that they would throw in a cool Easter Egg like a full version of the McBain movie?

This isn’t exactly new news and it’s been around for a couple of years but I saw a couple of people sharing it on my feed today and saying how incredible it was and I had never seen it myself so I thought it was probably worth sticking up on Sick Chirpse, as chances were that some of our readers might have missed it as well.

One of the funniest parts of The Simpsons back in the day – alongside pretty much all of it to be fair – was the character McBain, who occasionally showed up in a movie when The Simpsons were watching TV or at the cinema. I think the actual guy who played McBain – I think his name was Ranier Wolfcastle? – showed up in a couple of episodes too but I can’t be sure, I don’t remember.

Anyway, the point is he was great and was pretty much just a rip off of Arnold Schwarzenegger and all the dumb movies you saw him in and The Simpsons spoofed it pretty much perfectly. However, I didn’t know at the time that the writers of The Simpsons had done more with McBain then just write a few random funny scenes with him in and they had in actual fact created the entirety of a short McBain movie.

You see, if you line up all the clips from the McBain movie that have ever been shown in The Simpsons in the order they were shown, it actually comes together and makes a half decent narrative for a movie. Those Simpsons writers sure did like to put those Easter Eggs in huh? It’s a shame they don’t write them like this anymore.

You can check out the movie below in its entirety. To be honest it’s probably better than most Arnold Schwarzenegger cop movies. Definitely better than Last Action Hero at least (if you can call that a cop movie). Apologies for the ad before it too, but for some reason it wasn’t on YouTube.