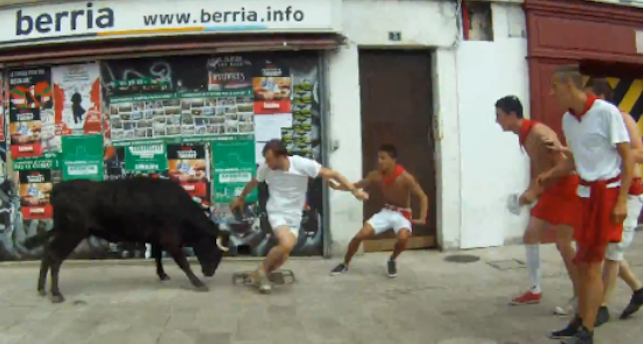 Apparently they don’t only let bulls out to gouge people at the running of the bulls in Spain, but they also do it every year at the Fetes de Bayonne in France, whatever that is.

Irregardless of location though, it’s probably a good idea not to try and get a selfie with a rabid bull – much as it isn’t a good idea to take a selfie in front of the peloton of the Tour de France – otherwise you might end up like this guy. He doesn’t seem to realise the danger he’s in by stopping to take a selfie multiple times with a rabid bull out for his blood, and as such gets gouged by one and completely fucked up. Like I said in the excerpt, probably serves the dickhead right.

According to a commenter he’s fine, and he’s actually more grateful for this video because it’s way better than a selfie ever could be. Go figure.