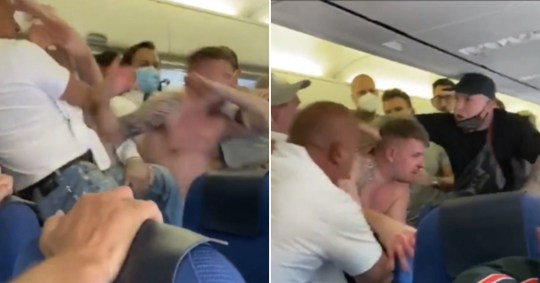 The most British thing ever?

Another day, another video of some people getting into a scrap because one of them refuses to wear a mask, with the location of these fights getting more and more stupid every single day it seems.

For this video, we’re on a flight from Amsterdam to Ibiza where two drunk British passengers were filmed fighting other passengers on the KLM flight after they were called out for not wearing masks. The Dutch airline is requiring that all passengers wear a mask for the duration of their flights, but obviously a couple of wasted Brits weren’t going to conform with that advice so decided it was a better idea to annoy everyone further by starting a brawl in the middle of the plane.

One of them is topless. Luckily (?), someone was there to film it for us:

Jesus. You really gotta ask yourself how you can get yourself into such a massive brawl on a plane ride haven’t you? And then also ask how it ended up getting so bad that half the freaking plane ended up becoming involved in it with a couple of people even  kneeling on the guy’s head to keep him from getting up again?

Really wish I knew how this all got started but you can bet that if it wasn’t about not wearing facemasks then it was probably about something like how someone was looking at them funny or bumping into them in the line for the toilet or something. You know what they’re like. The Two Brits need to take a look at themselves, although they’re  already probably doing that in an Ibiza jail cell right now after they were both arrested. Losers.

For more of the same, check out this ridiculous interaction over someone not wearing a facemask again. When are people going to learn?