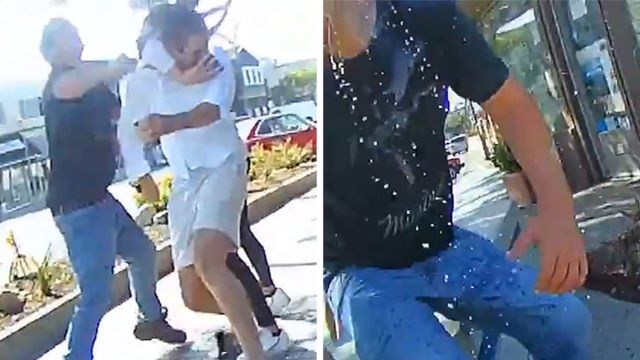 There are loads of people out on mask patrol these days and while I agree we should all keep on the safe side by following government guidelines, it’s probably best to give others a wide berth if they choose not to wear a mask rather than confront them over it.

Over in southern California, these two maskless guys were sitting outdoors and enjoying their coffee when a passing couple raised the issue with them. The girlfriend throws her coffee in one of the men’s faces, and it kicks off from there:

Oof. So many idiots in one video. Those dudes may have been violating coronavirus rules by not wearing masks in public, but throwing hot coffee all over them was hardly the best way to deal with it. I guess she thought she was safe from retaliation because she’s a female?

The person I feel most sorry for in this video though is the girl’s boyfriend. Gets his arse kicked and has to watch his girlfriend take a couple slaps too and all because she thought she could get away with throwing coffee at a stranger. Sadder still, he gets on the phone and calls the police which probably resulted in his girlfriend’s arrest seeing as she was the instigator and basically committed an assault. What a disaster! Probably best everyone just mind their own business from now on.

For the woman who terrorised a Starbucks barista for asking her to wear a mask and now wants a cut of his $100,000 GoFundMe, click HERE.