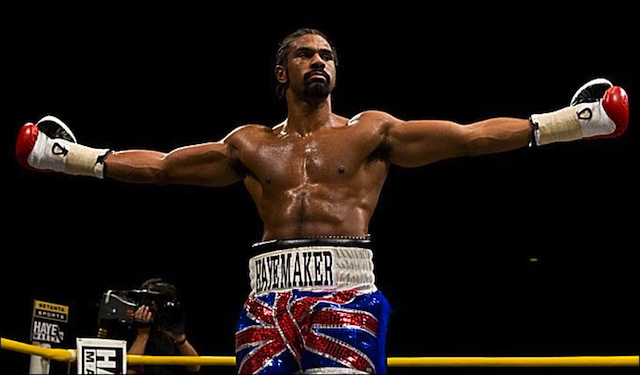 David Haye has not only called off his fight against Tyson Fury again, but has also pretty much confirmed his retirement.

There was no mention of a shoulder injury when David Haye postponed his fight with Tyson Fury in September (only a cut under the eye) but alas, the Hayemaker has called off their rescheduled February 8th bout too and worse than that, has strongly suggested he’s set to retire from boxing after surgery on his right shoulder, as per his doctors’ advice.

It’s a shame as many were looking forward to Haye potentially ending the cocky Mancunian’s unbeaten streak.

“It’s a crushing blow for me,” said Haye. “I had big plans for next year and the ultimate goal was to win back the world heavyweight title, something my amazing fans deserve. What I didn’t anticipate was that this year would be the unluckiest of my career and that a number of injuries would disrupt my plans so much. Perhaps it just wasn’t meant to be. The boxing gods keep hinting that maybe enough is enough and that it’s time to finally hang up my gloves.”

After surgery on his ruptured right subscapulatis and biceps tendon attachments, Haye has been strongly advised to hang up the gloves after a 23 year career which saw him win the European cruiserweight title, as well as unify the world title at that weight and take the WBA version of the heavyweight title from Nikolai Valuev in 2009.

Haye will of course also be remembered for destroying Audley Harrison and for blaming his loss to Wladimir Klitschko in 2011 on a sore toe. He will be going out on a big, personal victory though, decimating Dereck Chisora last year in a huge grudge match.

Never say never in boxing, but for now it looks like the Hayemaker is done.