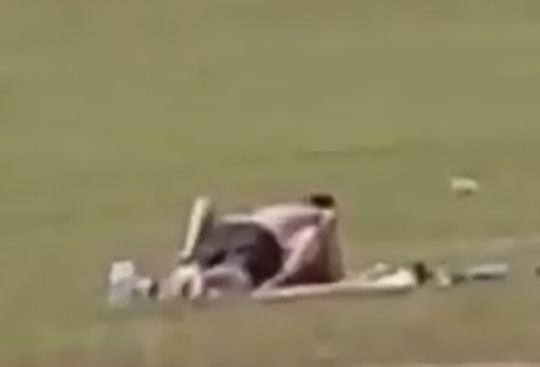 Someone even slapped them in the face.

We’ve probably all felt that unbelievable energy with someone where you simply have to have them right there and then, but I think most of us would have the common decency to at least go in the bushes or a toilet cubicle or something.

Not everybody though, as visitors to Roundhay Park in Leeds found out on Sunday. They witnessed a drunk couple have sex about four or five times in the middle of a field where children were playing cricket nearby, who simply refused to stop despite the fact that one parent slapped them around the face and ordered them too.

Spectators decided to film them to at least have some evidence of their actions after their calls to the police went unanswered for forty five minutes and they just kept at it without a care in the world. Or maybe they just wanted to sell it to the Metro or whatever so that the whole world could see it:

Yeah I mean how wasted/horny do you have to be to go at it like that in a park in the middle of the day? I mean fair play to them for acting on their relentless passion, but get a room or at least somewhere more discreet next time eh guys? Just saying.

Apparently the woman was later arrested for drunk driving but it’s uncertain right now if the couple will face any charges for their actions in the park. They probably should do though.

For more having sex in public, here’s a couple banging on a London night bus. Yeowch.