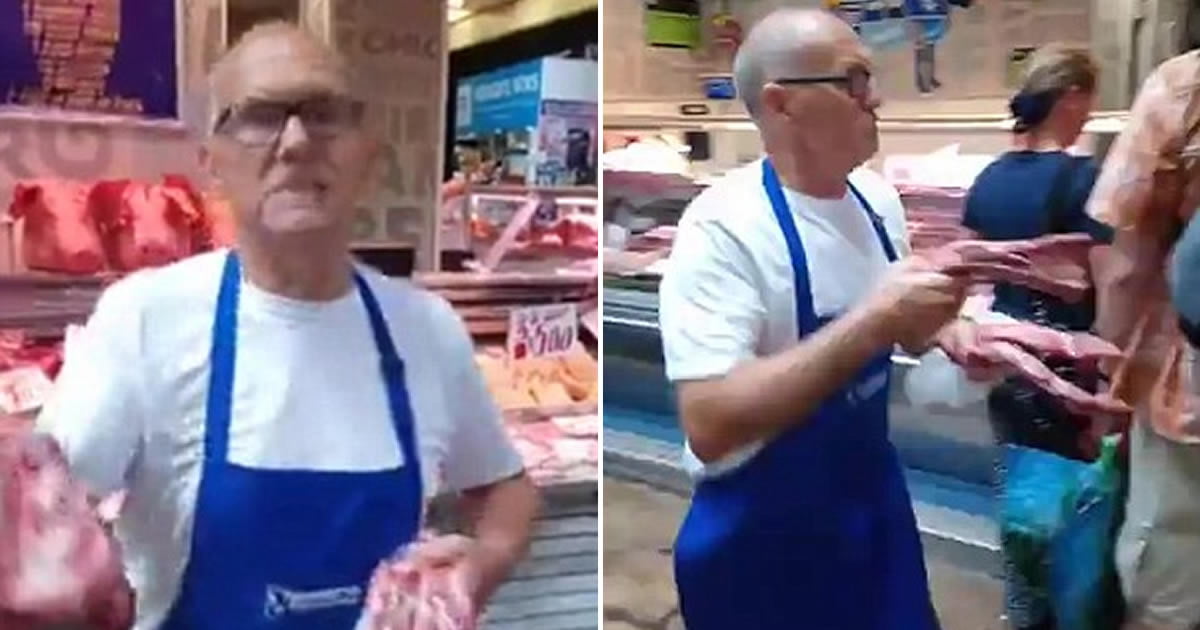 The vegan movement has been gathering momentum for a few years now and a lot of people are a lot more tolerant and accepting of them then they were a decade ago say – but there are still a bunch of people out there who will probably never come around to their way of thinking.

Some of these people are featured in the video below, which was filmed over the weekend at the Kirkgate Market in Leeds. A bunch of vegan activists were protesting against the sale of meat and one butcher became so infuriated with them getting all up in his grill that the decided to throw lumps of meat in their faces and swing pieces of meat at them.

It’s pretty outrageous behaviour but I can’t say I blame the guy when these vegans are coming to his place of employment and getting all up in his grill, even if it was a non violent silent protest:

I mean yeah, I kinda feel sorry for the dude getting guilt tripped by all these vegans, even if they are doing it in a peaceful and respectful way. Although I respect their commitment to the cause, I doubt that turning up and doing this is going to make lifelong livelihood. Not really sure what it’s achieving as veganism is on the rise anyway so it just seems kinda like vegan propaganda against meat eaters to be honest. Just let it happen naturally, it’s already well on its way.

To hear from both sides though, here’s what Ginette Lindstrom who filmed the video had to say about it:

The abuse started immediately as we had turned the corner and become visible to the butchers.

Instantly we were shouted at to “Get out” and “F*ck off”, along with other slurs as we remained silently walking down the shop.

I felt it was important to start recording live to capture the moment and so that people could see that we remained peaceful at all times and in case of physical assault or further verbal abuse.

The butcher physically assaulted me with the animals body parts. He pushed them in my face and into the face of two others and forced it to the mouth of another who got animal blood on her cheek.

Everyone was attacked verbally – progressing onto very violent verbal threats, we were told we were going to receive physical abuse if we did not move or stop recording and that our equipment would be smashed.

The reaction has been mixed as we expected but this post has really highlighted some extremely twisted and disturbed individuals and promoters for the agricultural industry.

We have received physical and sexual threats and a lot of abuse in general.

However we have also received a lot of positive support especially via inbox from people who haven’t wanted to comment on the posts due to the behaviour and language of those promoting and in favour of eating animals.

Yeah OK, so it’s probably not nice that they got assaulted but honestly what did they expect to happen? People get so butthurt about meat protests that stuff like this happens all the time and doesn’t really achieve anything for either side. Spend your day promoting veganism and making sick vegan food rather than actively protesting it – it’ll probably go down a lot better.

For more of the same, check out this woman getting vegan tattooed on her forehead. Yeowch.