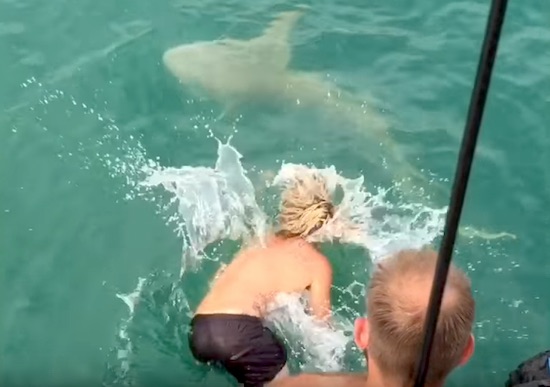 It should probably go without saying that it’s probably not a good idea to fuck around with sharks in their natural ocean habitat, but I suppose if your nickname is Ferret you’re probably not going to be the sharpest tool in the shed anyhow.

Ferret is an Australian guy who thought it was a good idea to head out into the ocean on his raft (?) and film himself antagonising a shark. Unfortunately for Ferret, it didn’t go so well when he fell into the water and started trying to wrestle with the shark because it just bit a huge chunk out of his leg.

Guess he got what he deserved:

Ouch. Kinda upsetting that they felt the need to kill the shark and string it up like that as some kind of an act of revenge, but I guess that’s just the law of the jungle. Or ocean, whatever.

Shout out to them for having some of the worst music taste in history as well for actually picking the awful Unckle Kracker’s ‘Follow Me’ to soundtrack this endeavour. He used to be Kid Rock’s DJ in case you didn’t know.