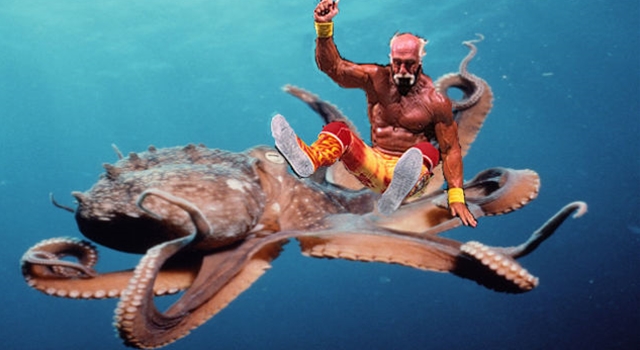 I’m sure you can’t have forgotten the strange and disturbing Calamari Wrestler and Crab Goalkeeper movies that recently started erupting out of Japan. So you’d be forgiven for thinking that octopus wrestling originated as part of Japan’s “sea-life sport” repertoire. But you’d be wrong.

You’d also be forgiven for thinking that I’m making this up, who would bother to wrestle an octopus? Let alone in a competitive sports arena. You’d be wrong again; this time I’m telling the truth. For once.

The sport of octopus wrestling was born and died in the roaring 60’s, it began and ended on the east coast of the United States. The World Octopus Wrestling Championships were held in Puget Sound, Washington and by all accounts they seem to have gone down a storm. In April 1963 as many as 111 divers took part in the competition, spurred on by 5,000 fascinated spectators. 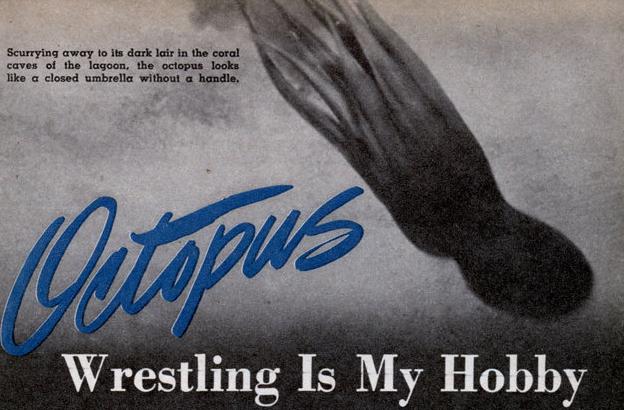 So if you’re interested in reviving the pastime here’s how it went: you dived down, found an octopus and “wrestled” it onto land. The octopuses (octopi?) were then weighed and for each pound in weight you got one point if you’d caught it in scuba gear and two points if you’d gone down with just snorkeling equipment. Whoever got the most points was the winner. Simple as that.

The octopuses were plopped into tanks to be gorped at by spectators and later on in the day were either released back to the ocean or given to the local aquarium. Some of these demons of the deep weighed up to 60 pounds, that’s about the weight of 50 cans of Strongbow. 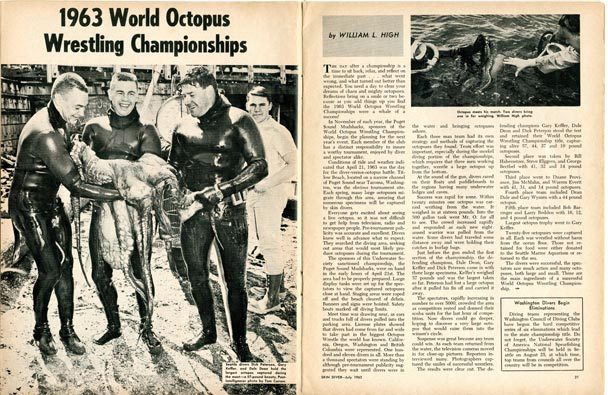 Merely to minnow about underwater is no longer enough, and such sports as octopus wrestling are coming increasingly into vogue, particularly in the Pacific Northwest, where the critters grow up to 90 lbs. [41 kg] and can be exceedingly tough customers. Although there are several accepted techniques for octopus wrestling, the really sporty way requires that the human diver go without artificial breathing apparatus.

Like to wrestle an octopus? I realize it all sounds like a loathsome sport but it’s really more fun than hunting some poor harmless creature. When you wrestle and kill an octopus, you’re ridding the marine world of a treacherous enemy.And you’d better watch your step, too. For there’s no such thing as a reckless octopus hunter. You’re either careful or dead.

But are octopuses really that dangerous? Can they really put up much of a fight? Well, in a word: nope. The sport was all for show and during interviews with some of the organizers later in life they admitted as much. The shows were organised to make some cash and raise the profiles of their (much more serious) spear fishing contests. Fair enough. 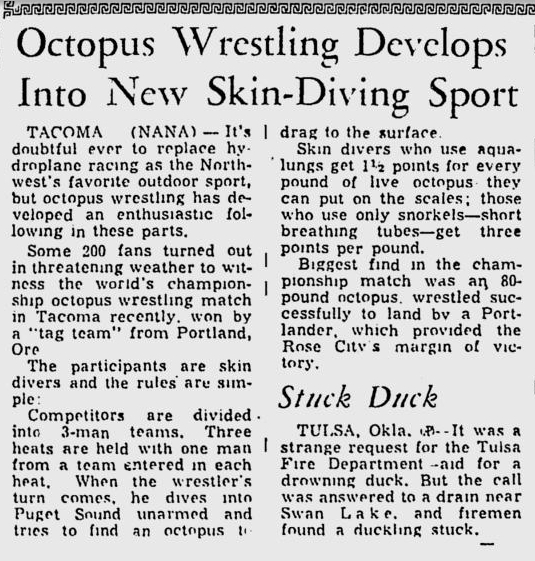 The fact is, octopuses are pretty docile, they would much rather jet away to safety than stand and fight, they are spineless after all.

Before these mass octopus wrestling competitions were to take place, the organizers would catch and release a whole bunch of octopuses in the appropriate areas to ensure the crowds got some wrestling action. 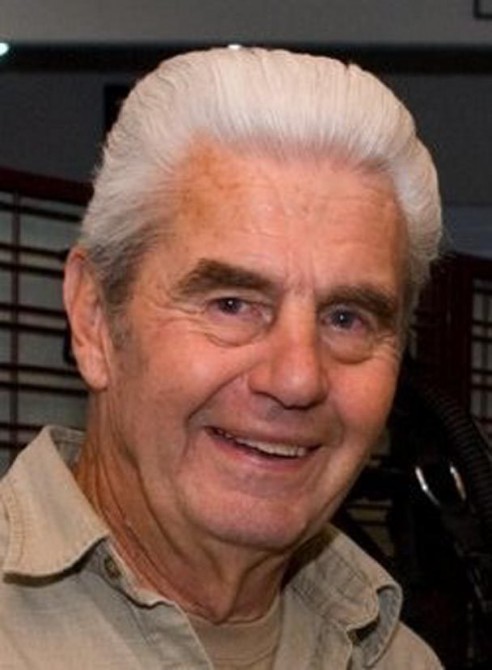 They have good suction, but if you get their arms, and pull, the suction cups go pop, pop, pop. They don’t have a lot of holding strength… You roll around, staging that you’re fighting him… They’re not very aggressive

When I first started reading about this “sport” I was really hoping it might be something I could get into. But alas, it is not. I guess I will have to stick to my current sport of choice — playing polo with decapitated goats in Kyrgyzstan…