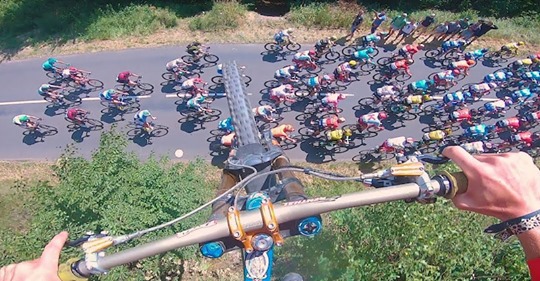 I’m not that into competitive cycling at all, but apparently in recent times at the Tour de France there’s been a new tradition where mountain bikers set up a gap and then jump over the Peloton as it goes past and it looks pretty sick to be honest.

The latest crew to get involved with this is a collective led by 19-year-old Valentin Anouilh, who was the rider that you can see in the video below. The gap is an impressive 16 metres and it’s one hell of a steep slope that he lands on too when he’s finished jumping over the yellow jersey.

The video that they’ve cut below features multiple angles of the jump that took place on Stage 10 of the tour yesterday between Saint-Flour and Albi.  Check it out:

I mean there’s no denying that that’s really cool is there? I guess you could whine and moan about how it isn’t very safe and could have been really dangerous, but it looks as though Valentin had it all under control and nobody actually did get hurt, so I wouldn’t worry too much about it.

In fact, it’s drawing more attention to the Tour de France and cycling in general so hopefully it will actually become a tradition each year and we’ll see some more crazy Mat Hoffman esque stunts in the future. We can dream.

For more of the same, check out this cyclist that got impaled on a wooden spike during a race. Not sure that’s what it’s all about.