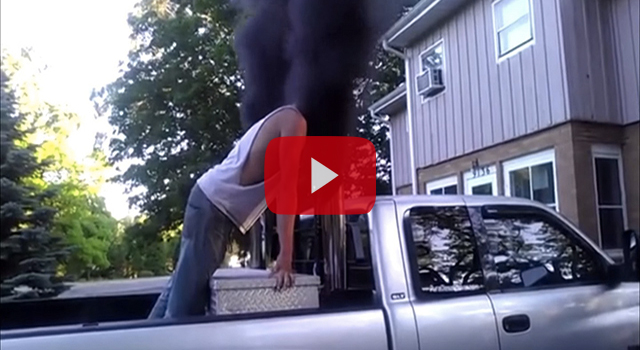 Itâ€™s always nice to take a look at a new trend; especially when it involves a disregard for all of humanity and is completely moronic.

Chatter about the state of the environment always seems to get people’s goats. Whether global warming is caused by us or not, or whether it exists at all are always up for debate. What shouldn’t be up for debate however, is whether or not we should try to be at least a little bit nicer to our home and stop crapping all over it.

A new craze in America called coal rolling or rolling coal has sprung up as a direct result of environmentally positive government policies. Redneck, hillbilly morons (the type that have bomb shelters in their yards and 5 years supply of Spam buried in their gardens) have started a new fashion that involves burning even more fuel than normal.

Basically they pay a guy $500 and get their pointlessly huge trucks (which already drink fuel liberally) souped up with a smoke stack.

This smoke stack allows the driver to fool the car’s engine into burning off more fuel than it needs to. This excess fuel can’t properly burn and is ejected as a dirty plume of soot, or “Prius repellent” as they refer to it.

What’s the point? Well, you get to annoy other drivers, cyclists and pedestrians and on top of that help bring our wheezing planet to its knees. Win win. This sort of fool looks on the use of fossil fuels as a fundamental right, akin to owning a weapon. 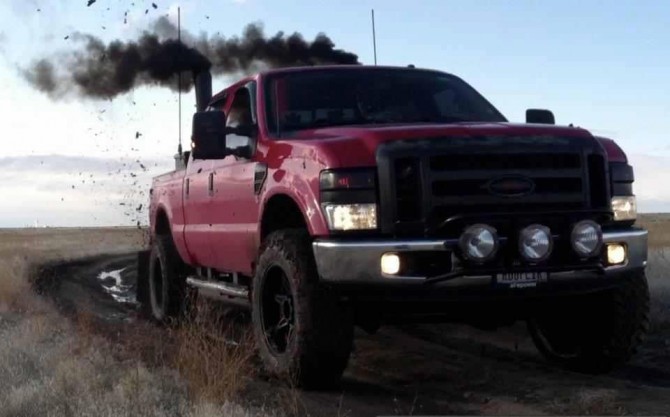 Rolling coalers see anyone who is walking, cycling or that owns a small and/or efficient vehicle as hideous “liberals”. According to a chap that sells these stacks, a lot of rolling coalers are Obama haters too, so anything Obama is in favour of they try their best to ruin. How very grown up, they’re ruining the air that their children breathe to spite someone who doesn’t even know they’re doing it. Good logic guys. It’s a dirty protest in the truest sense of the term.

Unfortunately there’s quite a bit of support for these fiendish fossil fuel fools with more than 100,000 posts on Tumblr and Instagram.

Whatever your political allegiances, surely these coal rollers can see that blowing rancid oil smoke into people’s faces is just a douche thing to do? The guy on the bike might have been banned from driving due to DUIs and actually own 38 rifles and a full bio-warfare armoury, for all they know. They might be poisoning the very people they support.

I think you can tell by my general tone that I’m not particularly down with this fad, and this is what really swung it for me: the American Cancer Society links diesel fumes to a number of health issues including a variety of cancers.

Stupid morons. Here’s a compilation video that quite ably demonstrates what a bunch of numb skulls they are: