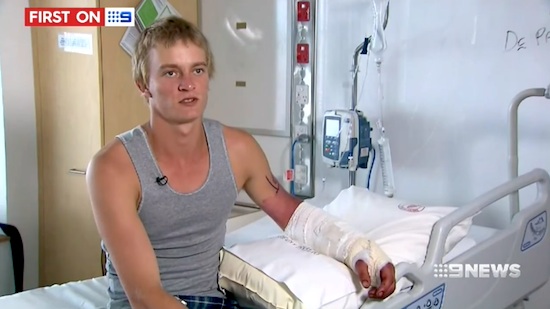 Hope it was worth it.

If you’re a straight guy that says they’ve never done anything with the sole intention of impressing a girl, then I’m gonna straight up call you a liar. We’ve all done it and whether or not it’s worked, I don’t think that any of us have ever done anything as stupid as the guy in the news report below.

Lee De Paauw is pretty much the definition of the Australian word bogan (more or less a redneck) and decided that he was going to impress a British backpacker by diving into crocodile infested water. Instead of impressing her though, he almost got mauled to death by the crocs and was lucky to escape with his life. Smooth.

Here’s everyone who was involved in the incident talking about it:

Wow. I love the way they cut that so Lee comes across like a complete and utter moron. I mean in fairness he is and there are too many of his quotes that you want to repeat, but the way he casually says he drank ten cups of Goon before he jumped into the river is pretty special. Of you don’t know, Goon is a highly alcoholic and cheap wine in a box option in Australia that is well known for making people act completely and utterly insane.

Also loved it when he said ‘haters gonna hate’ and was completely stoked that Sophie has agreed to go on a ‘movie date’ with him. No shit – she had to do something with him after that. But I don’t think going to the movies is going to get Lee where he wants to be – it’s probably more like a pity date.

If you want to know more about Goon, check out our report on it here. Not so good.