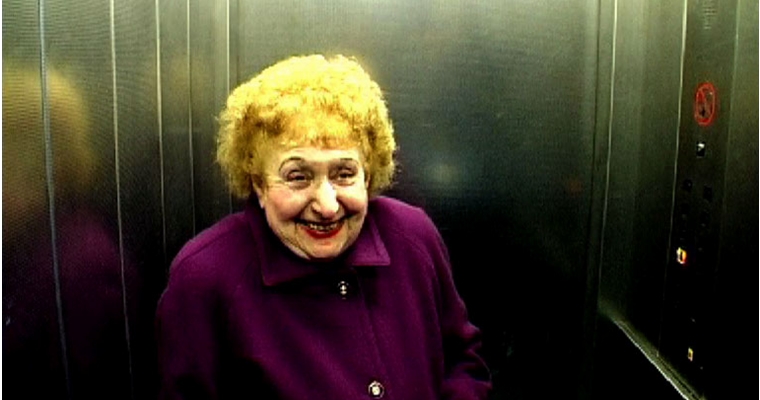 Maybe it’s twee to say something is funny yet moving, but this short film by Marc Isaacs, set in a lift in a London tower block certainly is both, and more.

Lift is the debut short film from producer Marc Isaacs. On first appearances you might imagine this would be a complete snooze fest: Mark sets up his camera in a lift in a tower block in London, not a posh upper class one, not one from the ghetto, but a simple, normal apartment block. Then he films those who enter. Sounds rubbish doesn’t it? People in England don’t talk in lifts, that’s a given. You just shut your mouths and sweat until you here the ping, then you get out without saying a word.

When Mark first appears in the lift, the discomfort is palpable, but as they relax, so do their tongues and what you actually get is a quiet, beautiful synopsis of the modern British resident. Warts and all. Of course, there’s very little information you can gleam from a conversation of under 60 seconds with someone who’s a perfect stranger. But, if you see that person every day for weeks, and dare to ask some probing questions, you end up getting some surprising insights into the people who before may as well have been robots for all you knew.

â˜› Read Next  – Is This The Scariest Movie Ever?

Everyone has their own opinion on life, love, religion, death, etc. etc. That’s an obvious statement of course, but when you sit down and wonder about the number of different feelings and memories that dwell inside each of the 7 billion brains in the world it’s a humbling picture that’s created. All of us, gathered together on this shitty little rock, spinning through the eternal darkness. Less than a speck within a speck. Yet all of us the centre of our own universe. It grounds me to remember how minuscule each of my tiny damp thought squibs are. Less than a flash in a microscopic pan, less than a storm in a bacteria’s tear duct. Yet all of these self important feelings are present in our soft skull inside a metal lift on a daily basis.

From nuns to drunks, from angioplasty to dummies. Maybe it’s twee to say something is funny yet moving. But it is. So there. Watch Lift below:

â˜› Read Next  – 50’s House Wife Interviewed Whilst On Acid