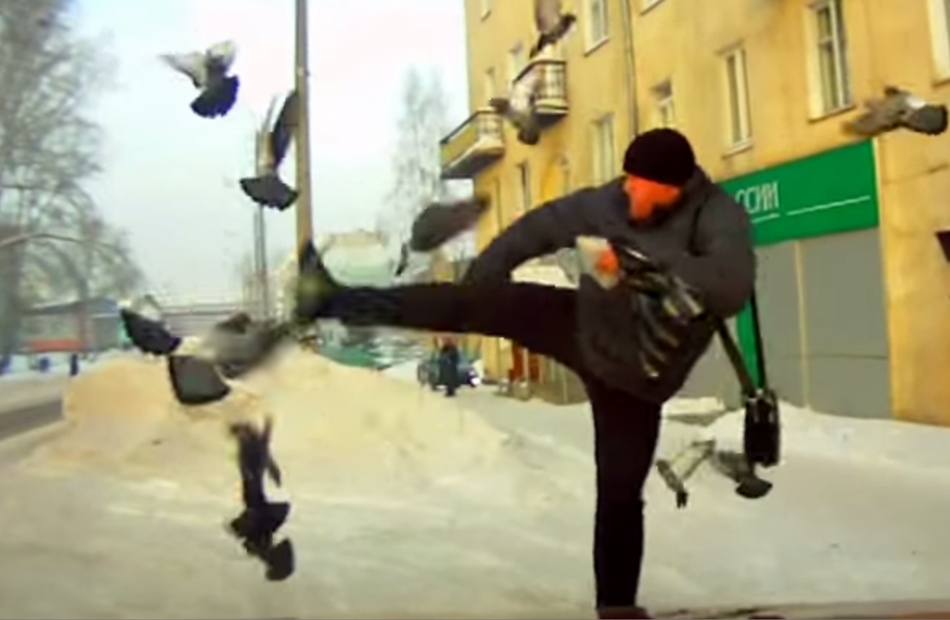 Is it ever OK to kick a pigeon? No.

I’d like to start this off by saying that I do not condone the actions in the following video. Not at all. Kicking animals, as a general rule, is out of bounds. If a shark is yapping at your crotch or a croc gnawing on your plums – fine. But in general life situations – no.

The following video isn’t quite as bad as the Chinese kids taping fire crackers to sparrows to play real-life Angry Birds, but it’s still bad. Basically, some guy in Russia somewhere, gets slightly irate with a bunch of pigeons that are hankering for his sarnie, we’ve all been there. But this fella takes it upon himself to boot one of them. Not cool.

Whilst we’re on the subject I feel I need to get something off my chest. There is a lot of pigeon hatred going around these days, and I for one am not down with it. People call them the “rats of the air”. I understand where they’re coming from, but maybe it’s time we took a look at ourselves: why are there so many pigeons around? Because us dirty humans leave our crap everywhere.

If we could be trusted to tidy up after ourselves then there would be no pigeon problems at all. If rats hadn’t already bagsied the title, we should call ourselves the “rats of the ground”, because that’s what we are. A dirty, disease carrying plague of mammals.

I know you didn’t click the link to read a rant from me, so let’s get the video going. I’m only showing you this because it makes me laugh every time I watch it, and I know that is bad.

See? It’s not funny is it? I know birds are regarded as stupid and therefore it’s fine to knock them about, but actually they’re pretty smart… well some of them are any way.