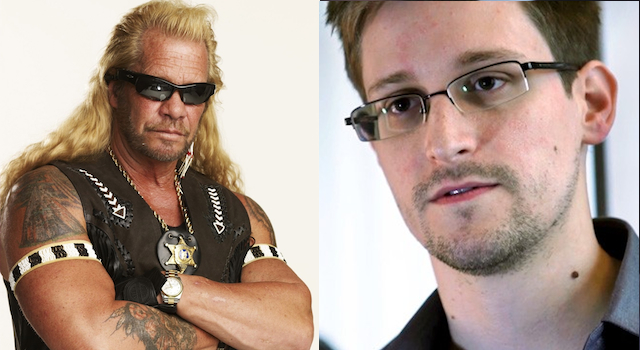 If you were on the run and the whole world was looking for you, there’s definitely one man you would not want to find out had joined the hunt.

We feature a lot of stupid news stories on Sick Chirpse and this has got to be one of the stupidest ever. If you don’t know about the Edward Snowden NSA story then you must have been living under a rock for the past two months but just in case that is actually possible then to summarise: Snowden exposed a lot of US government secrets and then went on the run and is currently holed up Russia – possibly in Moscow airport although he may have left by now – trying to get some country to give him political asylum whilst he tries to evade the US government who are after him and want to bring him back to the US to stand trial.

â˜› If You Want The Lowdown On Edward Snowden Click Here

So far nobody has been able to find him but that looks like it might be all set to change as Dog The Bounty Hunter has declared that he’s willing to enter Russia illegally to find Snowden and bring him home. If you don’t know who Dog The Bounty Hunter is then where the hell have you been son? He starred in some stupid TV show that was on Bravo in the mid 00’s where he would track down people who had skipped bail or something with his wife, sons and crack team of weirdo bounty hunters. It had cool theme music. It’s probably better to just show you a clip as that does a better job of explaining it.

Here’s a best of series 1 montage. If you don’t want to watch it then all you need to know about Dog The Bounty Hunter is that he’s basically an idiot, but it is definitely worth watching:

I don’t know what Dog has been doing the last few years – I’m pretty sure Dog The Bounty Hunter got cancelled?! – but I presume he’s just been kicking in doors and beating up perps still, only without the cameras rolling now. To be honest I don’t really care what he’s doing but it looks like he’s desperate to get back in the limelight if he’s declaring that he’s going to be the guy who’s going to find Edward Snowden and claim the billion dollar reward that is on offer for his capture from the U.S. government.

Obviously this is just really stupid considering his past experience of tracking people down is limited to small time cons who are jumping bail and holed up in shitty motels somewhere in Hawaii as opposed to big time international whistle blowers who are hanging out in Russian airports. This doesn’t seem to phase Dog though, who doesn’t seem to give a fuck that he’ll have to enter Russia illegally to find Snowden in that airport.

Here’s what he had to say on Friday when he announced his intentions outside a bail bonds store in Hawaii. Classy location for a press conference Dog. This kinda reads like he’s cutting a wrestling promo – only in reality – and that clearly is all kinds of awesome:

‘Sometimes you gotta bend the rules to save America, and if I can catch this traitor Snowden and bring him back to God’s side, then it’ll be worth the risk of a lifetime of hard labor in a Siberian gulag.Every Dog has its day, but Snowden, your days are numbered. Me and Beth are gonna catch you and bring ya to justice, the American way. If you’re listenin’ slick Eddy, the Dog’s comin’ for ya. You can run, but you can’t hide brah. The Dog has picked up your trail.’

I mean the brah is just so Hulk Hogan right? Unfortunately I can’t seem to find a video version of this promo, sorry I mean press conference, which is a real bummer because it sounds incredible. Following this promo Dog and his wife with the huge tits (see below) hopped on a plane to Hong Kong to look for clues in some of the hotel rooms that Snowden had stayed in when he was there. It seems crazy to think that nobody had thought to do that yet right? Idiots. 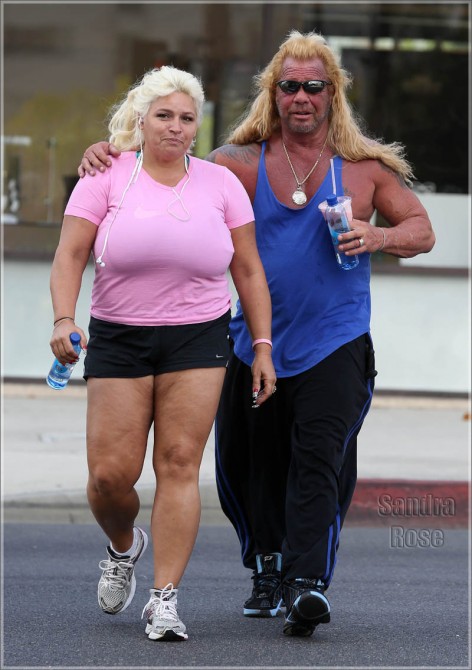 I’m sure that Edward Snowden is quaking in his boots at this news that Dog The Bounty Hunter is after him after hearing that speech too. I mean Dog has such an awesome track record of finding criminals that there’s just no way Snowden is gonna give him the slip is there?

I mean I know that LITERALLY THE WHOLE WORLD is looking for him and he seems to be giving them the slip, but I think the Dog will just be one step too far. Good luck Snowden, I wouldn’t want to have been in your position before this announcement and I sure as hell don’t want to be in it now.