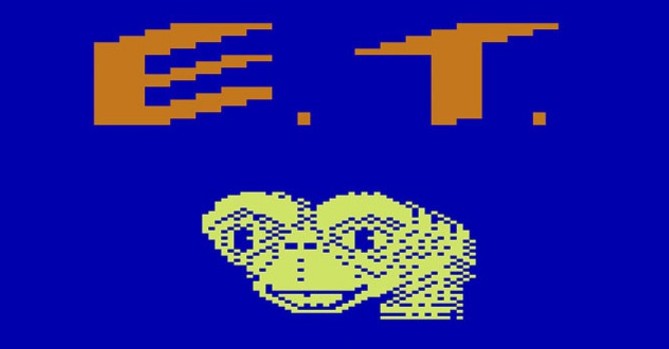 Was the disastrous “E.T.” video game really used as landfill? We’re about to find out…

If there’s one thing we can all agree on, it’s that video game adaptations of movies suck.

Sure, there have been a couple that weren’t entirely terrible – X-Men Origins: Wolverine was about four million percent more fun than the movie it was based on – but broadly speaking, every time you see a video game based on a blockbuster film, you know it’s going to be so bad that playing it would make you curse the uncaring god who gave you thumbs in the first place.

There are many reasons movie games suck – they’re seen as one more item of merchandising, like a t-shirt or an action figure, the deadlines for getting them made are usually brutally short, the movie industry still has a mostly dismissive attitude when it comes to gaming – but unusually for such a set-in-stone rule of modern living, we can actually trace the origin of sucky game adaptations to one specific point.

Whilst nobody will ever figure out why dogs have chased cats since time immemorial, or why old people insist on taking so god damned long at cash points, history will record that two little letters set the “bad movie-to-game conversion” ball rolling, way back in 1982.

Those letters were “E.T.”

Released in 1982 for the Atari 2600, the game was an attempt to cash in on a little-seen movie directed by some bearded fella. Whilst early 1980s video games weren’t particularly complicated by modern standards, they still took time to make, and “time” was one of many things not given to the developers of ET: The Game. By the time legal wrangling was done, only five weeks were left to get the game into shops.

Having created the “make it in as much of a hurry as humanly possible” business model for movie tie-ins, Atari also decided to invent the “take random key words from the movie script and throw them into the game at random” trope that’s been popular ever since.

What resulted was a barely-playable, tedious, car wreck of a game, which saw a pixelated splodge that allegedly represented E.T. wandering around endlessly samey levels, picking up brown dots which were meant to be Reese’s Pieces. 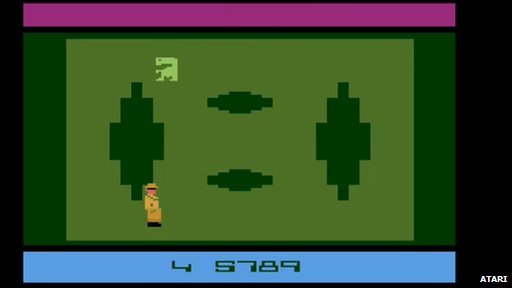 About every five seconds, E.T. would fall down a hole. This cost energy (as, indeed, did doing literally anything at all in the game) and so did climbing back out. More energy was acquired through Reese’s Pieces. 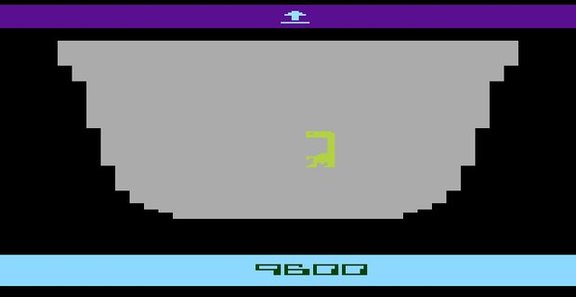 Anyone masochistic enough to play until they’d collected 9 Reese’s Pieces could then contact Elliot, who would give you one of the three fragments of a space-phone needed to “phone home.”

Atari apparently thought this was a winning formula, possibly because Atari executives’ mothers ate more thermometers during pregnancy than strictly recommended. Either way, the game was predicted to be a massive hit.

Initial sales were good – brand recognition went a lot further before you could flame a product to death online ten seconds after it was released – but no amount of sales could possibly have met Atari’s ludicrously high expectations. Reviews, meanwhile, were brutal. In a time when “Frogger” was getting high praise in the gaming industry, “E.T.” was still seen as a dud.

â˜› High Expectations Not Met? Arrested Development Is Back And Internet Fanboys Are Still Impossible To Please

The net result was literally millions of unsold “E.T.” game cartridges, which Atari had stockpiled in expectation of mammoth sales, and now couldn’t even give away. These cartridges were finally dumped in a landfill, at least according to urban legend, and the whole gaming industry spectacularly failed to learn a lesson about cheap, cash-in movie games.

Fast-forward thirty years and a team from Canada-based Fuel Entertainment have acquired permission from the city of Almogordo to dig through their landfill in the hopes of unearthing the rumoured E.T. game-graveyard.

Quite what they hope to achieve is unclear – are they expecting “E.T.” to have improved over time, like wine? Shouldn’t Fuel Entertainment be spending this time and effort making their own products instead of sifting through refuse for other peoples’ failures? Maybe folks at Fuel Entertainment never saw “Pet Sematary” and don’t understand that sometimes, dead is better.

More likely, they’re as amused as the rest of us at the idea that Atari had to use its Next Big Thing as landfill because it was so ridiculously unplayable.

Atari have never denied or confirmed the story that a million copies of the game were bulldozed into a hole, so it would be nice to find out if it’s really true.

Either way, the hunt is on, and Fuel have thirty days to dig up the most spectacular failure in gaming history.