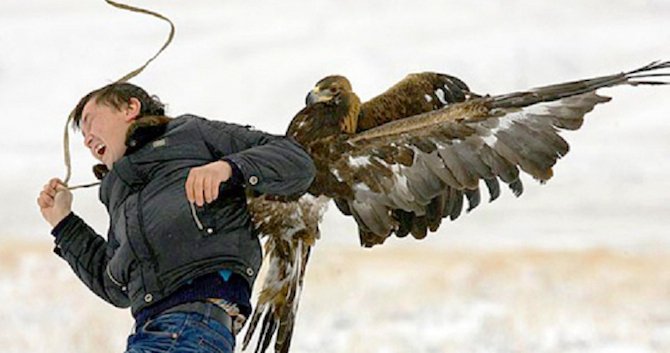 Eagles are amazing, glossy backed, serial killers. Here we salute their killing prowess with some bloody ace videos. DO NOT MESS WITH THE EAGLES.

Eagles are super cool, that’s an undeniable fact, you can try and deny it if you want, but I won’t be listening, and neither will anyone else. Firstly, they can fly, and there’s not a single human in the world that wouldn’t want to be able to fly. Secondly, they are at the top of the food chain and literally nothing can frig with them. If a lion had a go at it, sure, the eagle wouldn’t win if they were both confined to a cage. But in real life the eagle gives not a single shit as it soars away with ease, having probably done a bit of a gouge on some part of the lion’s fleshy anatomy. Thirdly, they look 100% awesome.

We published a post a few months ago showing a video of a toddler being swooped on and carried away by an eagle. It was a fake, but it did look ace. These videos I am humbly presenting to you today, however, are the real deal. This first video is one that my pal sent me which started this internet hunt for eagle attacks. It’s got some pretty moody, psychedelic, oriental doco tunes on it which really adds to the pensive mood. It features an eagle grabbing a bighorn sheep and literally lobbing it off a cliff. It’s just incredible footage and I got goose bumps. Maybe I’m just a bit of a natural world geek. I bet you love it though.