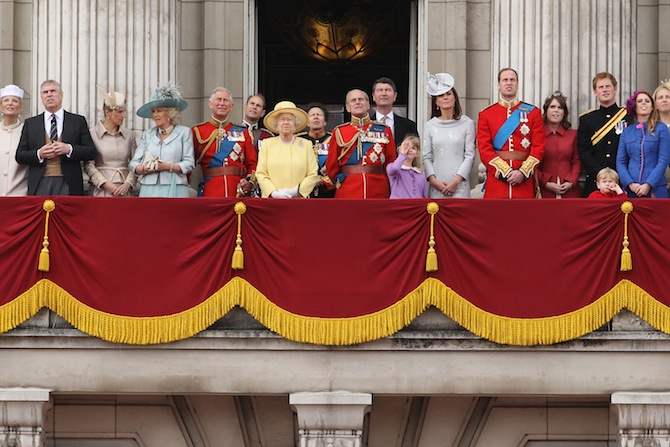 With another week of blind coverage, have we had enough or royalty? We weigh up the Pros & Cons of monarchy.

The lumbering dinosaur of another royal occasion, comes lurching to a halt, ready to keel over and fossilise publically; so we can all look upon it, compare it to the others and imagine how mighty a dinosaur the next royal occasion will be, and how best to prepare for it — notable suggestions include; setting up an exclusive channel for it and barring all others; having individual-event Twitter accounts; shutting down all newspapers on the day/week/month/year and having only one dedicated to the occasion dinosaur allowed; finding some way in which we can clone all royal occasions past and have them happen together — in some kind of park — so that the public may visit them freely, and coverage of them can continue, forever and ever and ever.

At least this occasion is over though, eh? Well, aside from the Daily Mail Online still being plastered, as I write, with headlines such as; ‘I wish I’d had a chance to do my hair’: Female cabbie reveals how she picked up the Middletons after they met their royal grandson — but they DIDN’T give her a tip, and, ‘They just liked the names… no more, no less’: Palace reveals why Kate and William chose GEORGE ALEXANDER LOUIS for their baby, and, Buck House sold to Qatar. The King lives in a small flat. The only people who marry are gay. DOMINIC SANDBROOK mischievously asks… ‘What kind of Britain will George rain over?’, among others. Oh, and when I flicked the channels — hoping the news outlets had realized what they’re there for, and returned to reporting on more important things — I find ITV News making a feature interview of the aforementioned taxi driver.

So, with occasion dinosaurs keeling over, our future King hatching out of his egg, and most media outlets circle jerking to their royalist fetishes still, do we sit and ponder whether we even need a royal family? We here at Sick Chirpse certainly do; because it’s best to be sure before burning Buckingham Palace to the ground and going lizard hunting. Without further ado, here’s the Pros and Cons of our royal family, through five simple headings; Money, Politics, Culture, Geography and sheer Entertainment Value. I shall be impartial, unbiased, and just straight to the point with my relaying of information to you, I swears.

*For those dying to know how that ITV News interview went, here are not just the highlights, but everything that was covered in that interview; she had a booking, it turned out to be the Middletons, she picked them up, they had a phone call in the car, she dropped them off, they got out, they exchanged a laugh, they left, she went about her day.