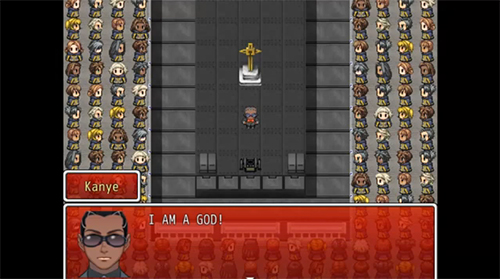 Independent games company Phenix have finally listened to and answered your prayers with a Kanye West RPG game set in the Lil B ran dystopian future of 3030.

Have you ever wanted to play a role playing game as everyone’s favourite kilt wearing, Kim Kardashian impregnating, rap megastar Kanye West set in the year 3030?

Kanye Quest 3030 is an unofficial, unauthorised RPG (role-playing game) created by the independent game developer Phenix. The player assumes the role of Yeezy who has been transported via wormhole to the year 3030.

The 3030 world is a dark, twisted (fantasy) future, where rapper Lil B reigns supreme. There’s only one way for Kanye to return to his own time, through the classic means of battle. To do this he has to team up with and fight clones of some of hip-hop stars including: Jay Z, Nicki Minaj, RZA, Eminem, MF Doom and everyone’s favourite hologram Tupac. To defeat his opponents he must use one of his skills: by either dissing them, bragging about his accomplishments and using his production skills.

The game looks pretty well done and the best part is that it’s free to download, but only for Windows.

If you’re too lazy to download the game but you want to know how it ends, the creators have uploaded a video of the final boss battle. Obviously it contains spoilers:

Hopefully they’ll make a sequel in the future, I’m hoping for a Rappers Tekken, I’d choose Vanilla Ice every time.