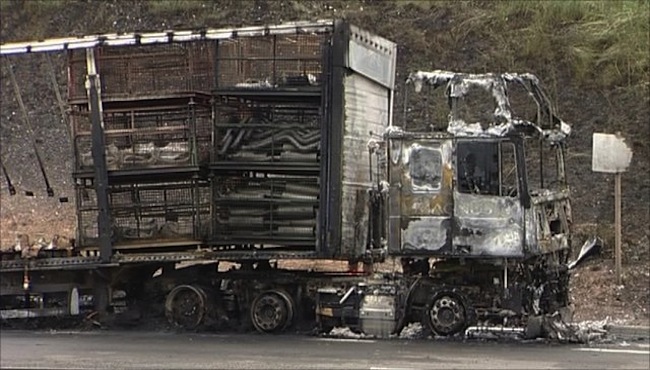 Dashboard cameras have a tendency to catch some crazy shit happening. Here’s one over in the US that shows a lorry flying into the air and exploding into a fireball.

The rise of dashboard cameras or ‘dash cams’ has soared over the last few years and they’ve caught some pretty ridiculous footage along the way. Whether it be a car hitting a bull trying to mount a cow, footage of an SUV nosediving into another car or a video of a horrific plane crash in Afghanistan, they’re constantly catching something outrageous happening that would otherwise never been seen again.

â˜› Everyone Loves A Bit Of Dash Cam Footage:

The Best Of Russian Dash Cams

Russian Bus Driver Smashes Into Cars Who Cut Him Up, Posts Footage On YouTube

The main reason for these dash cams, as you may or may not know, is to guard against insurance fraud as video evidence tends to overcome the issue of one person’s word against another’s in a court battle. Just how many people buy the cameras for this purpose, I’m a bit dubious about.

I’m sure many are going out in their droves to buy them, hoping to be ‘that guy’ who caught some unbelievable incident on film to gain two seconds of fame. Now this lorry driver from Indiana, US, could have bought his dash cam for insurance purposes or he could of bought it hoping to catch something insane on film and if he did, he’s definitely got his wish.

The video below shows the moments after a lorry swerved to avoid a car that drifted into its lane on the highway. The lorry can then be seen flying into the air, landing and bursting into flames:

â˜› Check This Out: Worst Martial Arts Instructor Ever

Now here at Sick Chirpse, as much as we love a crazy video or two, we also like the odd happy ending. Fortunately, the driver and his 7-year-old son, who was in the lorry with him, escaped with only minor injuries.