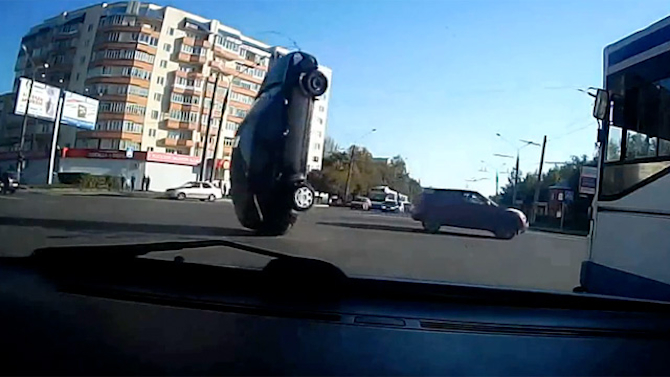 In Russia almost every driver has a dash cam because they need to record everything that happens because drivers over there are always crashing into each other and shit so they need it for insurance purposes. But, as it’s Russia they obviously pick up a bunch of crazy shit on there too. Here’s some of the best.

A dash cam is a small camera that sits on the dashboard of your car. In recent years with the advent of products like the GoPro, dash cams have become more and more popular. I don’t think that many people over here use them but over in Russia people use them literally ALL THE TIME out of necessity because everyone is so drunk and crashing into each other all the time that it’s the only way to settle insurance claims and police investigations whenever there’s an accident.

In fairness, that’s a pretty good idea and would probably save a hell of a lot of time over here for policemen and lawyers if it became mandatory, and then maybe people involved in those two professions could actually do something useful for once. They would probably still find new ways to piss everyone in the country off though, almost certainly. Anyway, I don’t want to talk about policemen and lawyers anymore because those guys completely suck, let’s talk about Russian dash cams some more.

One thing is for sure – if dash cams became mandatory over here than there is no way that anyone would ever want to play back film from one of them, unless they were involved in some kind of dispute over the quality of their driving. I mean when does anything interesting ever happen when you’re driving around England? Like hardly ever right? I can tell you, I’ve driven all over England, and Scotland and Wales and even Ireland, and I don’t think anything interesting happened ever except maybe it snowed or got foggy which made driving a van when I was really stoned slightly more difficult.

But yeah, nothing happened – it wasn’t like I was driving along and I’d see a big cattle lorry coming towards me and suddenly it would tip over and all the cows would go flying all over the road. That kind of shit never happens in England. But yeah, obviously that kind of stuff consistently happens almost every single day in Russia, which is why you can find loads of awesome videos of Russian dashcam videos and why they are all completely bonkers and crazy.

I’ve been driven around Russia before and I’ll tell you that I don’t think I have ever been as scared for my life when I’ve been in a moving vehicle. These guys are completely insane. The roads are crappy, the cars are crappier and the drivers are the crappiest ever. They just do not give a fuck. I was in Moscow and there was like ten lanes of traffic at an intersection and there was some kinda blockage in the middle of the intersection so people just started reversing back across lanes so they could get around it, which totally disrupted everything and made it even worse. It was like being in the middle of a bomb attack or something, that was how mental it was and how little regard people had for the rules of the road. Russia man, geez.

Anyway, this first video came out last June so I’m surprised we haven’t featured it yet considering how much we love Russia, but better late than never huh? It features trucks exploding for no reason, trucks going round corners and veering off their wheels, guys getting out of their cars and attacking other cars, a bunch of head on collisions , a bunch of fist fights in the middle of the street, a bunch of cars flying into snow drifts, and my personal favourite which is a bunch of guys robbing a lorry at gunpoint.

Has that whetted your appetite? Here are some single videos of Russian dash cams with some cool stuff going on in them. In this first one, the car stops at a zebra crossing (or the Russian equivalent) to let a pedestrian pass, but as he’s walking across it a car suddenly speeds through and misses him by about 1cm. Literally 1cm – it’s super close. The guy doesn’t even seem fazed by it though and just keeps walking across the crossing. I guess you get used to that kind of shit over there.