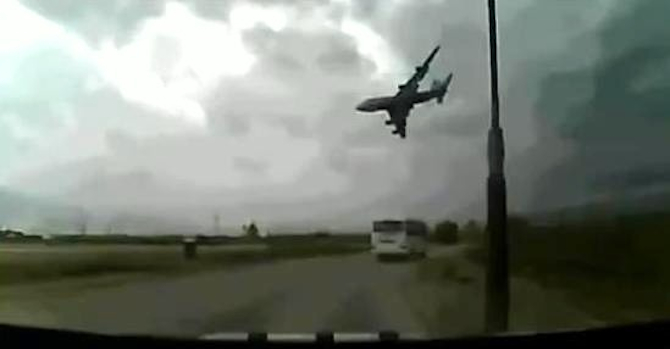 We’ve never seen a plane stall and just drop out of the sky. Now thanks to this video we have though and we’re not really sure how to feel about it.

I don’t know if you heard about the plane crash in Afghanistan on Monday – you quite easily might not have done because we didn’t cover it on Sick Chirpse – but it happened and it sounds about as horrific as plane crashes generally sound. It was a Boeing 747 cargo plane that took off from Bagram Air Force base in Afghanistan on Monday and pretty much immediately fell from the sky and exploded. Ouch. Fortunately (if such an event like this can be described as fortunate, I mean in the sense that it could have been a lot worse) there were only 8 people on board and the plane didn’t hit anything important on the ground. It still obviously completely sucks that these people have died though.

The whole thing was caught on the dash cam of  a vehicle that was driving around the airport at the time and it’s pretty terrifying and horrific – pretty much the kind of thing that makes you never want to go on a plane again. It’s being speculated that the plane crashed because some of its cargo load moved whilst it was taking off which caused it to stall in mid air, which is another pretty scary thought and the video only serves to amplify this by a factor of about a hundred.

It’s really weird just seeing a plane drop out of the sky after its forward momentum has vanished. kinda like a paper aeroplane or one of those gliders that you used to buy from the newsagents and throw off a bridge when you were a kid. Or if you’re 28 and visiting Luxembourg randomly then you might throw them off one of their really tall bridges. Either way, it kinda looks like one of those plummeting to the ground, except there’s no huge explosion when one of those hits the ground and there is here and after watching it you’re pretty much like ‘whoa, did that just happen.’

Anyway check out the video below. It’s probably even more terrifying that the guy in the vehicle doesn’t seem to say anything or react to it that badly, like it’s almost a normal occurrence over there. Grim.

The Best Of Russian Dash Cams