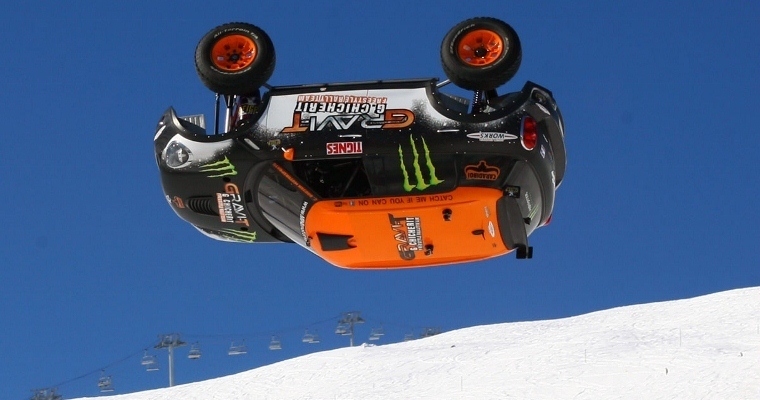 Most people flip a car when they’re smashed, but this guy does it for a living and he’s just performed a world-first: a 360-degree flip in a car.

We love crazy dudes at Sick Chirpse. Not in the bumming kinda way because we love crazy bitches as well. Actually, we love crazy dudes but we’d marry a crazy bitch if she was fit enough and wasn’t the kinda crazy that decimated you to a stinking mess of the man you used to be and pushes you into rocking back and forth and crying in the corner whenever she gets home from doing whatever a crazy bitch does. Oh, and she can’t be Lady Gaga crazy, either, because, to be honest, she’s kinda scary and you’d have to sleep with one eye forever stapled open in case she decides to get her wanger out and run it all over your chops.

Where would we be without crazy people, eh? The world be much even more shit and tedious than it already is and we’d be sat on our arses, reading the paper which would have no themes of crazy going-ons, just: death, royalty, stabbings, horse meat, tax dodgers, gay MP’s, death, royalty, stabbings, paedophiles blah blah blah. Most of Britain read newspapers for those aspects of life in the 21st century but people like that are really shit people, the sorta people who record University Challenge and think dubstep is a new style of patio deco. So, yeah, we need crazy people to lighten up our drab lives and instill some form of happiness against the slowly-ticking clock otherwise we’d be walking around like expressionless pieces of clay. No humour, no laughs, no existence. Basically, like North Koreans.

And this dude is one of the crazy bunch. I’m a run-of-the-mill driver, apart from when I’m being chased by the cops and then I make Schumacher’s skills look like a 5 year old’s, and I’ve never really understood those really cool guys you see driving tiny cars with huge exhausts hanging off the back because their car looks like a real-life Micro Machines car like that but if they wanna pretend to be 8 years old forever then good luck to them.

However, this guy would make my skills looks really puny and those boy racers would cry in exasperation if they were to go head-to-head with him. He’s a rally champion and a daredevil called Guerlain Chicherit and he’s just performed a world-first. A 360-degree turn in a car in mid-air using a static ramp, which is pretty similar to a quarterpipe. The car was a specially-designed Mini and he practised the jump a bunch of times before getting on with it properly and landing the 360 in front of thousands of people.

Here’s a picture of the crazy dude after the jump, helping the guys who are holding him up push hernias out of their arses: 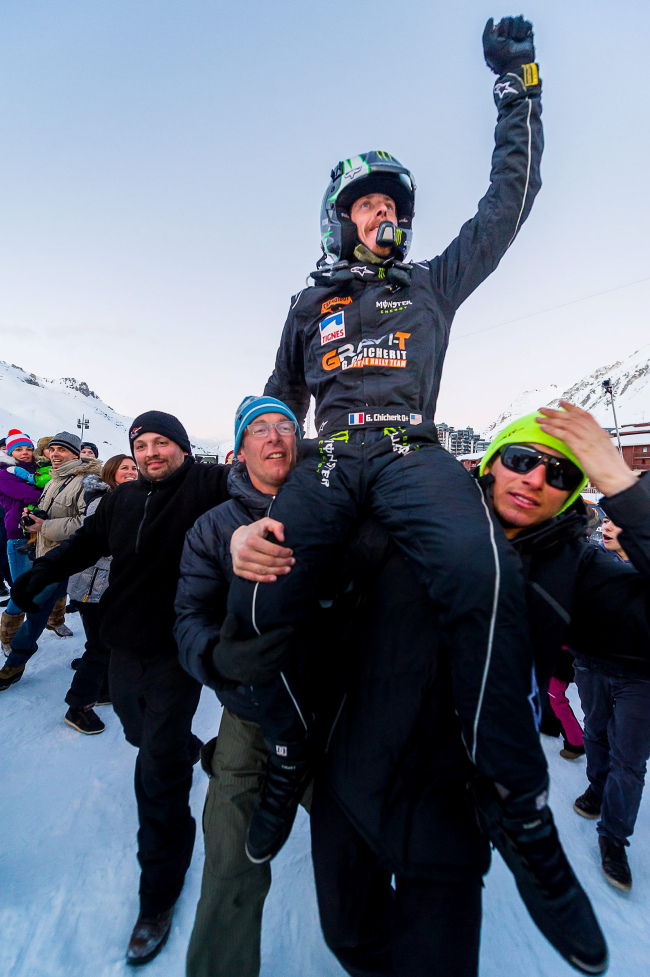 The car was launched to 75 feet off the 26 foot ramp and Guerlain had this to say about it:

‘Before the jump it was crazy. I had to arrive at 60kph (37mph) and be full throttle in the kicker to get the right rotation. In the jump, I knew the balance of the car was good and it took me maybe 20 seconds to realise I had landed on my wheels. When you attempt something nobody has ever achieved before, the stress is really high but the only way is to just try it.’

Lifelong advice. Here’s a video of Guerlain doing the deed: