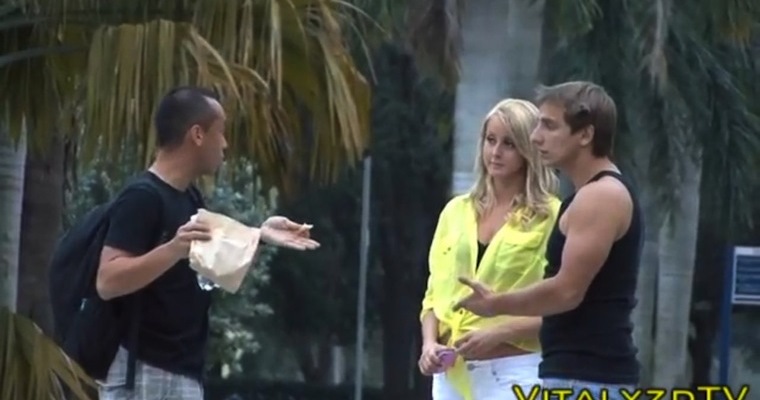 What do you do when other guys brazenly check out your girlfriend in public? Ignore them? Kill them? Prankster Vitaly Zdorovetskiy lets them know they’ve been rumbled, even when they’ve not been looking at all.

Other guys checking out your girlfriend is just something you have to ignore, unless you enjoy the prospect of a punch up with a stranger every five minutes. Why not just be proud of the attention your girlfriend gets, and count yourself lucky that other dudes are mentally spreading Nutella over her butt cheeks, instead of throwing a strop and ruining what was otherwise turning out to be a perfectly lovely evening with your partner. After all, you stare at other peoples’ hot girlfriends all the time, and believe us you’re not as discreet about it as you think.

Sick Chirpse favourite Vitaly has no such mercy for the wandering eyes of strangers. With his girlfriend in tow, he plays the role of the overprotective, jealous boyfriend, accusing guys of eyeing her up at random, while she stands there nodding in agreement and doing nothing to diffuse the situation whatsoever.

Reactions vary from “I swear I wasn’t looking at your girlfriend” to “I have my own girlfriend” to “Oh, I think it’s just the glare on my glasses”, but all are captured on film and pretty hilarious.

Pull Up Your Pants Agency