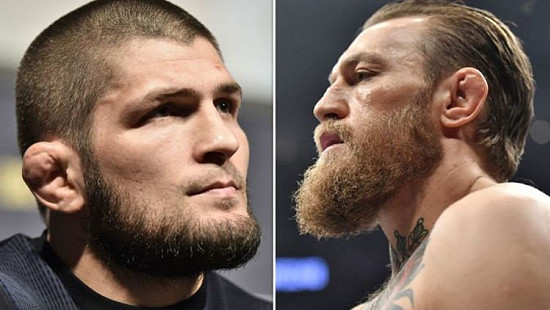 These two have to fight again after this.

It’s no secret that McGregor & Khabib intensely dislike each other, and even after Khabib submitted the Irishman back in October 2018, it seems McGregor won’t stop till they set up a rematch.

Well this latest exchange occurred when Khabib started talking street fights during his UFC presser for his fight against Tony Ferguson next month:

“IN STREET FIGHT I CAN EAT YOU.”

McGregor mocked Khabib’s claims in the video by sharing this image of Khabib shitting himself on a bus:

To which Khabib responded with this classic picture of McGregor gasping for air in the cage with him:

And it carried on from there…

show it to your son and say how good you are on the street fight pic.twitter.com/o6EXXW0yKt

I save my hugs for postfight ❤️ pic.twitter.com/KuFuZQ9BE5

I think that last one by McGregor is supposed to be mocking Khabib’s fighting style which relies heavily on wrestling, but either way I think you have to say Khabib won the meme war? That photo of him pummeling McGregor with the caption going “Heeeeelp” is the type of lolz I didn’t think Khabib was capable of.

And anyway even if McGregor did get the better of Khabib on Twitter, at the end of the day the decision goes to the person who actually kicked the other person’s ass in real life. Which I guess is what Khabib’s fight-stealing meme suggests anyway.

If they do make this fight happen again, it’s going to make a shit tonne of money (again). Although the inside scoop is that Conor has to get through Justin Gaethje next, and it could be happening as early as this summer.